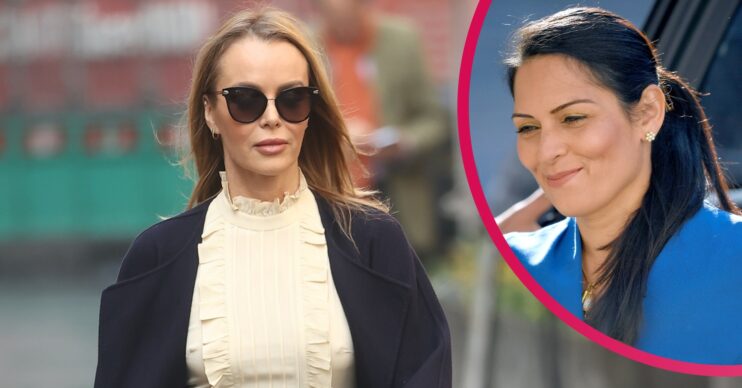 Amanda Holden took aim at Priti Patel and the government today, branding their response to the refugee crisis in Ukraine as “utterly ridiculous”.

The 51-year-old has recently returned from Poland where she was interviewing Ukrainian refugees for her podcast.

Amanda, who was calling in from her studio in Heart Radio, has launched a new podcast, Ukraine’s Hidden Voices.

In the podcast, Amanda has interviewed refugees fleeing a war-torn Ukraine as they try to make their way to safety.

Read more: Amanda Holden praised on Instagram as she launches special project for people of Ukraine

During her appearance on the show, Martin asked Amanda why she went to speak to Ukrainian refugees for the podcast.

She explained that she had put a post up on Instagram about the Red Cross, which led to a Ukrainian mother from Kyiv commenting.

“I started a conversation with her which then resulted in me actually being able to call her,” Amanda explained. “Then I spoke to my producers here at Heart and we decided to a do a podcast.”

What else did Amanda Holden say about Ukraine?

She went on to explain that the podcast was done so that the people of Ukraine’s voices could be heard.

“I think it’s a great place for us to learn and be educated about their plight,” she said of the podcast. She also said that it would give a completely different point of view to what the news is showing.

Amanda then went on to explain why she physically went over to Eastern Europe.

“The reason I went out there was because there was an American volunteer that we spoke to on our podcast who said I should go out there and see it for myself,” she said.

“And I thought, do you know what, I’m talking to these people who are clearly distressed and displaced and bewildered by the whole situation, from the comfort of Heart’s studios.

“I should go out there really and see it for myself.”

What did she say about Priti Patel?

Amanda went on to say that the whole experience was “very overwhelming”.

Amanda then explained how in one humanitarian centre, refugees sat under the flag of the country they wanted to relocate to.

“It’s a very efficient service being run there by everybody but the UK,” she said. Amanda confirmed that there was a Union Jack flag in the humanitarian centre.

She said that there was a charity from Bristol there trying to help. However, due to the amount of paperwork, the going is slow.

“But they said you know, there are 35 pages of paperwork of which the first five questions are asking those refugees what their financial situation is, what their mortgage situation is when they literally have a bag on their lap with all their possessions in, it is utterly ridiculous,” she said.

“So, you know, Priti Patel is winning, we’re not going to get many people coming into our country, despite the fact, 150,000 people volunteered to open up their homes.

“So I felt quite cross about that, to be honest.”