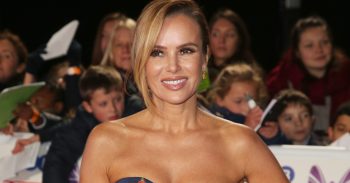 Amanda Holden picks who to bed out of Simon Cowell, David Walliams and Piers Morgan for Celebrity Juice game

The panel played a saucier version of 'snog, marry, avoid?'

Amanda Holden was put on the spot during a cheeky game in Celebrity Juice and ended up joking that she would sleep with her Britain’s Got Talent boss Simon Cowell!

The TV star was roped into a game of “S**g, marry, kill?” on Keith Lemon’s quiz show and was given the choice of Simon Cowell, David Walliams and Piers Morgan.

Amanda, 48, was reluctant to make a decision at first but ended up saying she would hypothetically bed Simon!

When host Keith gave Amanda her options, she complained: “Do I have to [bleep] any of them?”

It was a bit awkward for the star, who currently works alongside Simon, 59, and David, 47, on Britain’s Got Talent.

She also sat alongside 54-year-old Piers when he was a judge on the ITV talent show.

After much persuasion from her co-stars and Keith, Amanda then admitted: “Alright, I’ll [bleep] Simon, I’ll marry David and I’ll kill Piers!”

Good Morning Britain presenter Piers soon piped up when he got news of Amanda opting to kill him!

Read more: Amanda Holden hits back at claims she’ll tone down her risqué outfits on BGT

What do you think of Amanda’s choices? Leave us a comment on our Facebook page @EntertainmentDailyFix and let us know!