No one can always be picture perfect!

Amanda Holden has mocked herself for looking a little less than picture perfect in the way only beautiful people can.

The telly fave shared a photograph that her husband Chris had taken while she was sleeping on a flight – and the angle wasn’t the most flattering. 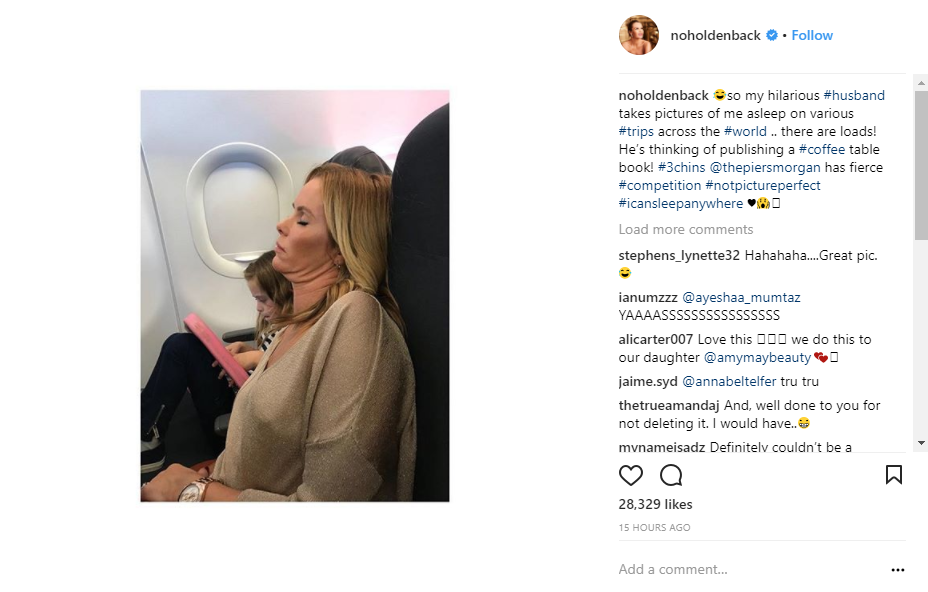 The couple were on their way home after an idyllic holiday with their young daughters during the girls’ Easter holidays from school.

The family spent some time chilling out on a break in Morocco.

And 47-year-old Amanda ensured that she wowed her followers on Instagram with some amazing snaps.

In the series of shots, the blonde star looked like she was having the time of her life.

One shot saw her soaking up some rays and in a sexy black one-piece, and her fans couldn’t wait to comment on how good she looked.

“You are so beautiful. I love u so much,” one gushed.

Another added: “No words can explain how hot you look @noholdenback The true meaning of M.I.L.F.”

And a third said: “I think you’re quite possibly my favourite celebrity on the planet!”

In another pic, the Britain’s Got Talent judge beamed alongside her record producer hubby of a decade.

A third snap showed Amanda’s fun side, as she posed in a restaurant wearing a Moroccan Fez hat, as worn by the late comedian Tommy Cooper.

And there’s even a rare picture of her daughter Hollie – although the young girl’s face is not shown.

Amanda makes a welcome return to TV this weekend, as the new BGT series kicks off.

ITV announced the comeback of Britain’s Got Talent with an excitable tweet last week.

It said: “We CANNOT wait for the new series to start! Not long now…”

Amanda will be back as a judge alongside Simon Cowell, Alesha Dixon and David Walliams.

Are you excited for the return of Britain’s Got Talent? Leave us a comment on our Facebook page @EntertainmentDailyFix and let us know what you think!