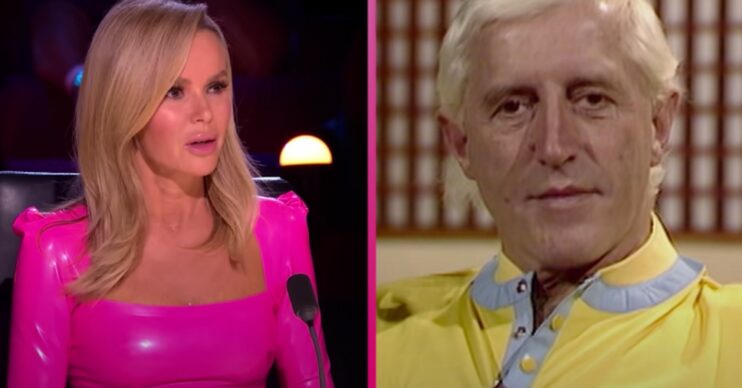 Remembers the 'weird smile' her gave her

Amanda Holden once had an unplanned encounter with sex abuse monster Jimmy Savile as she lay in a hospital bed.

The Britain’s Got Talent judge, 51, opened up about the bizarre meeting with the predatory DJ in her 2013 autobiography.

She wrote in No Holding Back that Savile, who died in 2011 aged 84, joked about ‘giving her one’.

She was only 19 at the time. And it turns out Amanda was in hospital because of a badly cut finger.

Read more: Amanda Holden: Who is her husband? Why did she split from Les Dennis?

She’d accidentally sliced through the top of her digit. The injury saw a lot of blood spilled, even though it didn’t really cause her any pain.

Her boyfriend at the time had a brother who was a doctor at a hospital in Leeds. And so Amanda was duly rushed to see the medic who stitched her up.

But it was while she was waiting on some painkillers that Savile made his unexpected entrance.

‘Jimmy Savile was standing in front of me’

Amanda went on to detail her surprise at the TV personality – whose foul crimes had yet to be reported – being in her presence.

Furthermore, it seems every word he uttered was both distasteful and unnerving.

Amanda admits she was stunned to come face to face with the pervert whose public persona suggested he was a generous benefactor to many charitable causes.

She recalled in her book: “All of a sudden, the curtain to my cubicle drew back and Jimmy Savile was standing in front of me!

He gave me a weird smile.

“At that point, he was still regarded as a legendary fundraiser and philanthropist. He looked at my bandaged hand and made a lame joke about me attempting suicide. I was completely taken aback. Then he asked me, ‘Have you got any gynaecological problems?'”

Britain’s Got Talent airs on ITV, Saturday May 14, at 8pm.