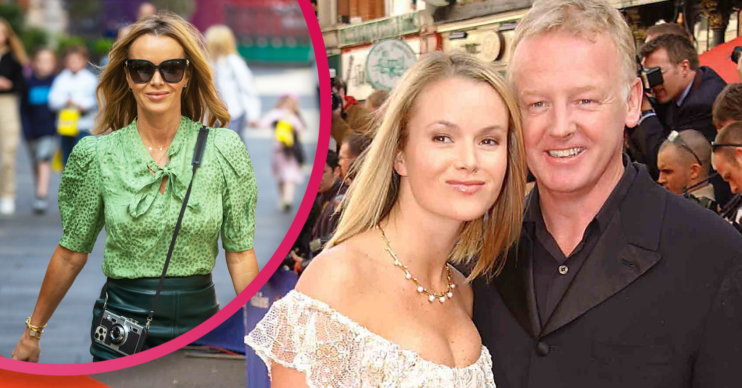 Amanda Holden: Who is her husband? Why did she split from Les Dennis?

Amanda Holden – now happily married to husband Chris Hughes – has had quite a relationship history.

The BGT judge has hit headlines for her romances, but she’s since settled down with the love of her life.

But what happened before she found The One?

Why did Les Dennis and Amanda Holden break up?

Amanda and Les married in 1995, and instantly became one of the UK’s most recognisable couples.

However, disaster struck five years later when Amanda had an affair with actor Neil Morrissey.

Amanda and Les briefly split, however, they later got back together and were determined to make it work.

Sadly, things didn’t go to plan and the pair divorced in 2001.

In 2013, Amanda opened up about her affair with Neil. She said: “I don’t believe women have affairs for no reason.

“Neil rightly or wrongly got loads of stick. I feel like it was my fault – I was the one who was married.

“I want to change the general perception of him, as he was very caring and very loving and very worried about me because I lost so much weight.

“He used to cook for me and look after me and babysit the dogs.”

Speaking on Piers Morgan’s Life Stories, the Men Behaving Badly star said that their affair was going to happen regardless.

“Amanda was having problems with her relationship anyway, as far as I was concerned. The ring was on the finger but the marriage was not really there.

“That was my understanding at the time. We had a lovely time when we had that brief fling.”

Who is Amanda Holden’s husband now?

Read more: Amanda Holden on how ex-husband Les Dennis was her ‘saviour’ during dark time after affair

They began dating a year or so later. The lovebirds then tied the knot in December 2008, with their at the time nearly two-year-old daughter Lexi in attendance.

He’s rubbish at romance, but he’s there for the solid things – such as keeping my car clean and making sure I relax.

They went on to welcome their second daughter Hollie in January 2012.

Opening up about their romance, Amanda revealed in 2019: “Chris is very funny and errs on the side of lightness. We can make jokes out of any situation throughout the best and darkest times of our lives.

“He’s rubbish at romance, but he’s there for the solid things – such as keeping my car clean and making sure I relax.”

“The secret to our success is humour,” Amanda once revealed. “We take the Mickey out of each other mercilessly.”

Amanda also said in the past that sex plays a big part in their romance, and it helps that they can’t keep their hands of each other even after two decades.

“He can’t keep his hands off me,” she told The Sun.

“I actually tell him off because I say: ‘I don’t want to have a kiss and a grope while I’m trying to load the dishwasher.’ Chrispy’s up for it any time. Always. So it’s when I decide. Poor chap!”

Britain’s Got Talent continues on ITV, this Saturday (April 23), at 8pm.