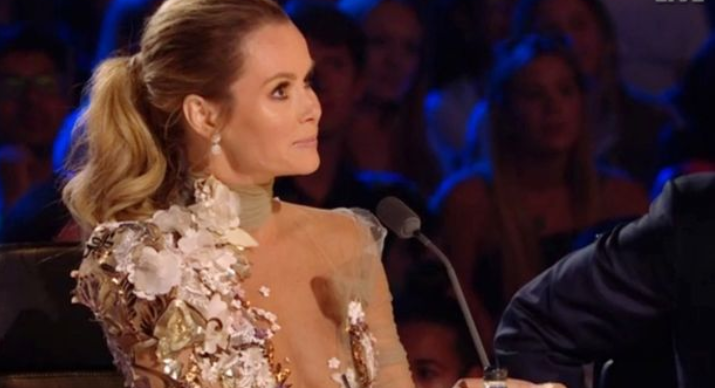 She's amused by the attention her boobs are getting

Amanda Holden’s dresses have been a talking point all series of BGT, so it’s no surprise she upped the ante for the final.

While the 48-year-old mum of two looked stunning, the get-up for a family show continued to garner some criticism.

Amanda, put on a proper dress you might as well be sat topless. #BGTFinal

Wtf! Is Amanda Holden wearing so she covered her tits for the semi-final but for the final she has got them showing out again, it's like she has half her dress missing. This is a family show put it away, no cares might as well came naked. 🤮🙈 #BGT #BGTFinal

Earlier today she admitted that she loves that there’s so much focus on her cleavage.

She shared: “I love it that people are still talking about my tired old breasts and I’m nearly 50!

“No one talks about [BGT co-judge] Alesha Dixon’s – she’s got great boobs by the way – and she’s eight years younger than me.”

The blonde beauty explained that stylist Karl Willettt is responsible for her recent fashion evolution.

Speaking to the Mail On Sunday newspaper’s You magazine, Amanda said: “I go through different phases, I have a different stylist – a bloke. It’s a different eye.”

Amanda is also proud that her outfits remain affordable to most of her fans, insisting she hates it when someone tells her an outfit is designer because even to her it’s too pricey.

And, unlike many of her critics, Amanda doesn’t allow her age to influence her style.

She said: “Age is totally irrelevant, thanks to people like J-Lo, who is 49 and just a sexy, hot woman who dresses for how she feels.”

The star has hit back at claims that she wore a “risqué” dress on a “family show”.

And Amanda has admitted: “My [bleep] seem to become the show’s biggest talking point every year.”

The Britain’s Got Talent live final takes place on ITV tonight at 7.30pm.