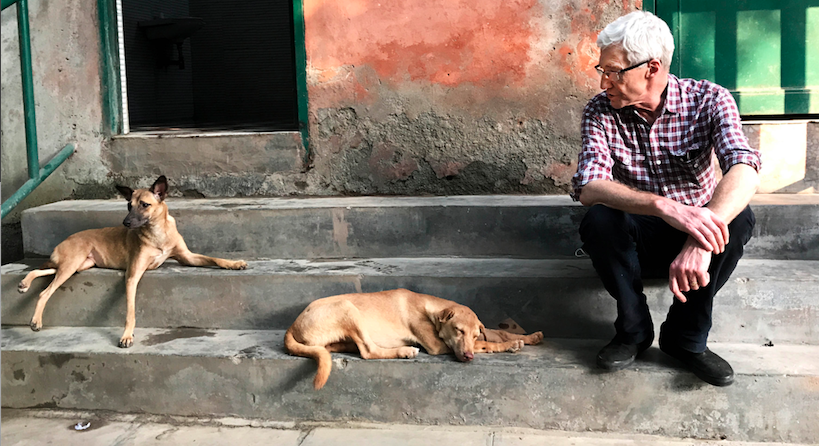 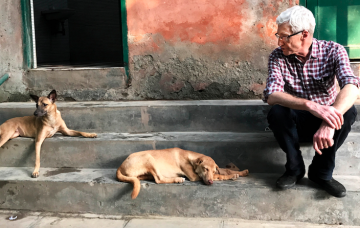 Everything about Paul O’Grady’s For The Love of Dogs

Paul O’Grady finds himself a long, long way from Battersea Dogs & Cats Home in London for his upcoming For the Love of Dogs series on ITV, heading back to India to meet some of the people who devote their lives to helping abandoned canines in Delhi.

The beloved comedian gets stuck in like never before as he helps the team at the area’s best dog shelter where 50 sick and abandoned pooches come through the doors every day.

Many of these dogs would not survive without the food and care given to them by local residents and the Friendicoes shelter.

There are an estimated 400,000 waifs and strays on the streets of Delhi – from puppies involved in road accidents to older dogs with chronic arthritis.

And this four-part series will show the Birkenhead-born Lily Savage star – who has presented six series of For The Love of Dogs on ITV since 2012 – exploring the complex relationship between the local population and the real life slum dogs who need nursing and affection.

“Animals are instinctively drawn to me,” the 62-year-old has previously told The Mirror.

But despite having vast experience with animals both in front and away from the cameras – Paul keeps dogs, goats, pigs, chickens, ducks and sheep living at home with him at his Kent farm – he still faced some unique challenges while filming for the new run of shows.

Unsurprisingly, Paul fell in love with practically every pooch he encountered. However, he probably wasn’t expecting to contract a near-fatal virus where his kidneys started to fail.

Why does Paul put himself through it? Well, For the Love of Dogs, of course…

Here’s a little bit more background info on Paul O’Grady’s For the Love of Dogs: India to whet your viewing appetite…

What can we expect in the first episode?

In the first episode of the new series, Paul meets an abandoned pup with a dangerous infection and a gorgeous Golden Retriever who won’t stop chewing her paw.

He also helps rescues a litter of puppies born in the Lodhi Gardens city park from a terrible fate.

Friendicoes, the city’s oldest dog shelter, opened in 1979 and is a home to the likes of Golu.

Golu was discovered tied to the bumper of a car. The mistreatment she received has triggered a stress disorder, leaving her constantly chewing at an inflamed wound on her paw which she must stop doing to give it any chance of healing.

Will medication and a strong dose of love and affection help Golu?

We also meet Arthur, a nervous and newly-abandoned dog unable to bond with other free-roaming shelter hounds who live in a park nearby.

Worryingly, Arthur has Parvo Virus, a virus which causes loss of appetite and severe dehydration.

While dogs in the UK are vaccinated by their owners, there is no such protection for Delhi’s street dogs. Fingers crossed Arthur will have a speedy recovery after being put on a course of antibiotics.

Paul also battles the traffic on Delhi’s frantic streets on the back of a motorbike to get to Lodhi Gardens to meet volunteer Maria who feeds the 50 wild dogs wandering around the grounds which are also home to stunning architecture dating back to the 15th Century.

She introduces him to shy Blackie, new mum to six pups who were birthed in a nearby bush. However, despite Blackie’s attempts to guard her babies, they must be moved from the undergrowth to avoid being infected with diseases.

“We had to get them out of there because if we didn’t, the rats would have got them,” Paul told What’s On TV.

“The people who treat these street dogs are fabulous. Maria’s amazing. They’re doing their best with limited funds. India’s a marvellous place.”

How did Paul manage to leave without bringing all the dogs back with him?

It was a pretty close call. There was one particular, elderly dog Paul wanted to bring back to the UK with him – but sadly the poor creature was too frail to survive the journey.

He recalled to the TV Times: “[There was] a big, old, black Lab cross, called Kalu. He was crippled with arthritis, cataracts, mange and he stunk! We clicked. He used to wait for me at the gates in the morning.

“I wanted to take him home to Kent with me but I couldn’t because he was top dog in the pack. Saying goodbye to him really broke my heart.”

Paul added to Best magazine: “They said he was so old he probably wouldn’t survive the journey and that the guy who ran the dog shelter would be broken-hearted if he left.”

What challenges did Paul face?

Paul contracted a serious virus while out in India, as well as enduring a close call with rabies due to handling a sick puppy and weeks of concern waiting for the results of tests for tapeworms once he returned to the UK.

He explained to What’s On TV: “I ended up in hospital after playing with two maggot-infested puppies.”

“I was delirious and my blood tests revealed I was headed for renal failure. It’s because Westerners don’t have the immune system to cope.”

Paul admitted to The Mirror becoming ill was his own fault after he fed the pups by hand and flicked maggots out of a rat bite, apparently touching his mouth or face soon afterwards.

After suffering from violent bouts of vomiting that last for hours and hours, a hardy but out of it Paul – who has survived three heart attacks – was kept in hospital overnight and pumped full of antibiotics.

However, he soon discharged himself so he could get back to work.

“I thought: ‘I haven’t come over here to lie in a hospital bed. Although I looked like I’d ben dug up!” he joked to What’s On TV.

He was also warned he could have tapeworms, and said he and the entire crew had to have blood tests when they returned from filming last November.

“It’s easy to get tapeworms from dogs,” he told The Mirror.

“But every time you go to the loo, to wonder if you’ve got a tapeworm for two weeks, it’s too much. Thank goodness none of us had it in the end.”

Despite the health scares, Paul has not been put off returning to Delhi.

“I think I’ve got about four lives left, that’s loads,” he joked.

What has Paul got to do to get a knighthood for services to pooches?

No doubt it will come one day – and Paul has already received an MBE.

In the meantime, For the Love of Dogs is acclaimed for its TV excellence, picking up two National Television Awards. The show has also been nominated for BAFTA.

And in January this year, Paul’s devotion to animals was recognised at the NTAs when he was presented with the Special Recognition award for his work on For the Love of Dogs.

He told the audience: “The show is such a team effort. The staff at Battersea, I love doing the show, it’s so dangerous as I now have seven dogs.

“I’m delighted the programme has done well as it highlights their hard work and shows the good side of people… and the bad side when you see the abuse.

“Thank you for this so much!”

Are you a huge fan of Paul’s TV shows about animals? Let us know what you think by leaving us a comment on our Facebook page @EntertainmentDailyFix!