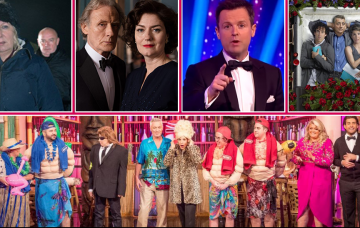 All the shows you need to know about this Easter weekend!

It’s Easter, which means a four-day weekend for many of us. The weather is going to be rubbish, so ED! is giving you all permission to stay on the sofa and indulge yourself with loads of chocolate and top telly – there’s plenty to tune into (for once!).

Good Friday sees the end of a bad, BAD man as soap’s most notorious serial killer finally comes a cropper, following his looooooooong reign of terror…

We’re not sure how we feel about Phelan being bumped off on the same day as Jesus – hopefully this is one TV villain we won’t see resurrected in three days!

Wife Eileen finally learns the truth about his murderous ways, but as she confronts him, both their lives are in danger… Miss Friday’s Coronation Street, ITV, 7.30pm and 8.30pm at your peril.

When Saturday comes, treat yourself to a takeaway in your belly AND on your telly, as Declan Donnelly flies solo for the first time in his presenting career.

There’s the return of an old classic on Easter Sunday, as Mel and Sue – er, resurrect, The Generation Game, BBC1, 8pm.

The show – previously presented by Bruce Forsyth and Larry Grayson – sees guests from Martin Kemp to TOWIE’s Gemma and Arg getting up to all kinds of mischief.

If you’re in the mood for a touch of wildlife with a side order of fluffy, Attenborough’s Wonder of Eggs, Saturday, BBC2, 8pm, sees the great Sir David explore the evolution and variation of different species’ eggs. It’s, um, eggsellent.

What Bank Holiday weekend is complete without a bit of Agatha Christie? Originally slated to air at Christmas, three-parter Ordeal by Innocence, BBC, 9pm, starting on Sunday, sees a young man arrested for the murder of his adoptive mother, a rich philanthropist.

There are films for all the family across the entire weekend too, with Friday’s 102 Dalmatians, BBC1, 1.25pm, Saturday’s Shrek Forever After BBC1, 3pm, Sunday’s classic Dumbo, Channel 4, 4pm and Monday’s Paddington, Film4, 4.40pm.

What are you most looking forward to watching? Leave us a comment on our Facebook page @EntertainmentDailyFix and let us know what you think!