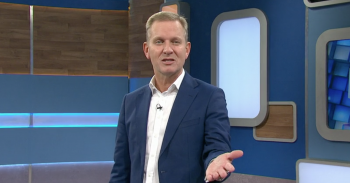 All episodes of The Jeremy Kyle Show pulled from ITV Hub

A guest has died after filming for the show

Yesterday morning ED! reported that Monday’s episode of The Jeremy Kyle Show had been cancelled, due to the death of a guest.

In a statement, ITV also announced that it had suspended the filming and broadcasting of future episodes “with immediate effect”.

The network said: “Everyone is shocked and saddened at the news of the death of a participant in the show.

“ITV has also decided to suspend both filming and broadcasting of The Jeremy Kyle Show with immediate effect in order to give it time to conduct a review of this.”

The guest has now been named as Steve Dymond, a 62-year-old grandfather and digger operator from Gosport, Hants.

He had gone on the show, filmed May 1, to prove that he had not been unfaithful to partner, Jane Callaghan.

Steve underwent a lie detector test which, to his shock, he failed.

He was reportedly left feeling humiliated and traumatised, despite the test not being 100% accurate in proving the truth.

While the show is under investigation, all previous episodes have now been been deleted from the ITV Hub.

Viewers will be unable to access any Jeremy Kyle Show programmes.