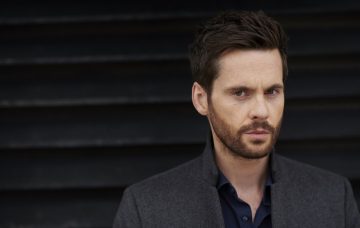 From the minds behind Unforgotten and Marcella

Based on Adam Creed’s debut novel Suffer the Children, that November 2016 pilot has now spawned a six-episode series – with the two-hour pilot split into the first two episodes of the new run.

Dark Heart’s central character is Detective Inspector Will Wagstaffe, played by Tom Riley, a troubled workaholic haunted by the unsolved murder of his parents when he was a teenager, who attempts to get to the bottom of the most brutal of crimes.

Wagstaffe investigates mysterious and macabre killings in London as he struggles with his own trauma and the pressures of trying to balance his overwhelming professional life with romantic and family ties.

Think Unforgotten tinged with Marcella and you’re nearly there.

And that description seems particularly fitting as Dark Heart is penned by acclaimed Unforgotten creator Chris Lang, and Ben Harris, one of the writers of the Brit noir drama Marcella starring Anna Friel.

Wagstaffe – known to colleagues as Staffe – is an extraordinarily talented copper, despite the fact his policing often crosses the line of good practice.

And it is this gap between dispensing justice and following the law which makes Dark Heart so tense – and immensely watchable.

“I’m not as nice or as trusting as those other officers,” Staffe says, by way of introduction in a short, unsettling teaser clip.

What happened previously in the Dark Heart pilot?

As the ITV Encore pilot which has already aired will form a two-part story in the upcoming full series, this preview is not spoiler-free.

As a heatwave leaves the capital wilting, Staffe abandons his holiday plans when called on to look into a very messy and disturbing death.

A man in his thirties has been restrained to his bed before being choked and savagely mutilated.

It soon becomes clear this death was not an isolated killing but just one attack of many towards suspected but unconvicted paedophiles.

As the bodies pile up and Staffe uncovers completely unexpected horrors, the detective’s methods – and willingness to embrace less scrupulous approaches – are tested to the limit.

What can viewers expect from the rest of this run of Dark Heart?

Staffe and his team from Leadengate police station investigate the baffling death of a young nurse on the London Underground in the second two-part story of the series.

London’s gritty underbelly is exposed after forensic officers discover a DNA link between the victim and a missing teenager presumed dead for nearly a decade.

In the final two episodes, an X-rated performer is found murdered in an east London church, her lifeless body gruesomely positioned as if in prayer.

The victim had suffered harassment from a stalker shortly before her terrible slaying.

But could her turbulent private life – rather than the difficulties and vulnerable situations that came with her job – be key to her untimely end?

And how will Staffe cope with the strain of the case as his own life spirals out of control?

When will Dark Heart be on TV?

The teaser video above on this page, however, confirms the series will begin in October, and we’re halfway through the month already so it won’t be too long until it airs.

Where do you recognise lead actor Tom Riley from?

Cinema viewers also saw him in horror sequel Return to House on Haunted Hill that year.

And in 2009, he appeared on the big screen as Romeo in St. Trinian’s II: The Legend of Fritton’s Gold in a supporting role.

Happy Birthday to my forever mancrush Monday. A girl whose fake laugh game humbles and inspires me. She was truly miserable in this picture but you would NEVER KNOW and it’s that kind of ability to suppress emotion that will serve us well in our life together. #mcm

His TV credits include 28 episodes of Da Vinci’s Demons, Monroe, Doctor Who (playing Robin Hood), Inside No. 9 and spin off dramas Casualty 1906 and Casualty 1907.

Who else is in the cast of Dark Heart?

Juliette, played by Charlotte Riley, is Staffe’s sister (the two actors are not related in real life) and his closest friend.

Staffe also thinks the world of her young son Harry who stays with his uncle when Juliette rows with her boyfriend.

Millions watched Charlotte, 36, when she starred in ITV’s 2009 adaptation of Wuthering Heights.

She may also be familiar to viewers thanks to her appearances in The Take, DCI Banks, World Without End, Peaky Blinders and most recently, BBC One Drama Press.

Another quick, not entirely relevant fact: she is married to Tom Hardy, her co-star from Wuthering Heights.

Perhaps best known from her role as MI5 field operative Jo Portman in 37 episodes of Spooks, the 40-year-old has also appeared in Married Single Other, Death in Paradise, Lewis and Doctor Who.

The 28-year-old has also starred in CBBC’s The Sarah Jane Adventures and has turned up in Midsomer Murders, The Missing and The Inbetweeners.

Leave us a comment on our Facebook page @EntertainmentDailyFix and let us know what you think of Dark Heart!