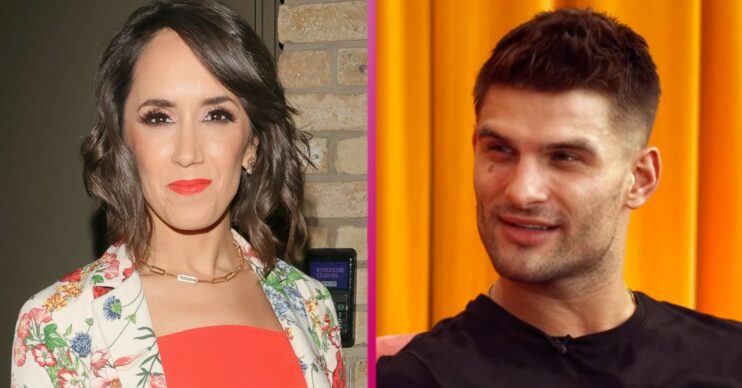 The Strictly stars were both overwhelmed

Aljaz Skorjanec and wife Janette Manrara have got to be one of the sweetest couples on TV.

The lovely Janette – who appears on Celebrity Mastermind tonight – has the rare distinction of being both a star pro dancer and a presenter within the Strictly Come Dancing world.

She has previously opened up about the overwhelming emotion she felt when Aljaz got down on one knee… and how she momentarily doubted it was really happening!

The couple spoke with OK! magazine about the romantic moment Aljaz proposed in August 2015.

Aljaz made arrangements to ask Janette the big question in the same dance studio where they had first met five years beforehand.

However, he tried to ensure it would be a surprise when he presented her with a ring by making out they were there for a different reason.

Aljaz revealed: “I told Janette we were going to a promotional event for my friend and that there might be press, so to look nice.”

Aljaz’s set up almost worked too well… as Janette seemed unsure whether he was asking her to get hitched or not!

She explained during the chat: “I was about to start crying and then I thought, what if he’s just tying his shoes?”

I was about to start crying and then I thought, what if Aljaz is just tying his shoes?

However, when she realised the proposal was really happening, the It Takes Two presenter soon shed a few tears of joy.

And she wasn’t the only one – Aljaz also welled up with emotion.

He chuckled at the happy memory: “It was a very manly cry. It’s such a beautiful moment so you can’t really help it.”

Celebrity Mastermind airs on BBC One on Saturday February 19 at 6.25pm. The episode’s other famous contestants are Nish Kumar, Olly Smith and John Altman.