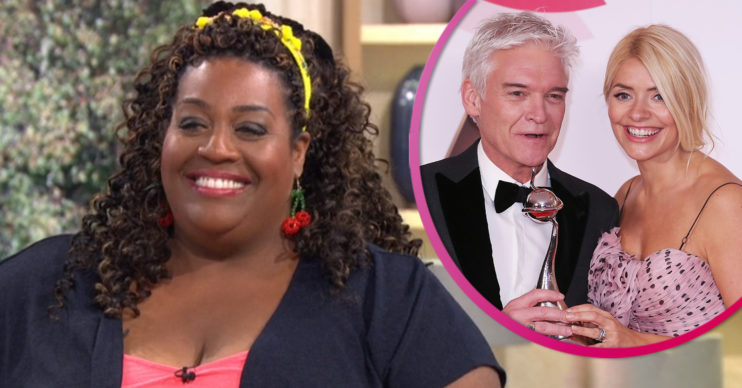 Holly and Phill will return in September

Alison Hammond has sent a message to Holly Willoughby and Phillip Schofield as they hosted their final This Morning today.

The pair are off on their two-month summer break and will return to the programme in September.

Alison was in the studio to tend to an ice-cream van and was on hand to dish out treats throughout the show.

Following the programme, Alison shared a message to Holly and Phil.

She shared a photo of the duo to her Instagram Stories.

Alison wrote: “A massive thanks to @hollywilloughby @schofe for doing such a fabulous job through lockdown along with @eamonnholmes and @ruthlangsford.”

Meanwhile, Alison suffered an unfortunate ice-cream disaster after getting it all over her outfit.

Phil told viewers: “We’ve had a bit of an accident in the studio…”

A massive thanks to Holly and Phil for doing such a fabulous job through lockdown.

Alison then showed her cardigan with ice-cream splattered over it.

Alison explained: “I was doing an Instagram Story and it went a little bit wrong.”

Phil told her: “Get yourself mopped up,” to which Alison said: “I’ve got no tissues!”

At the end of today’s show, Holly and Phil looked back on their best bits over the past year.

Holly said: “We don’t usually run credits at the end of our show as we like to hand straight over to the Loose Women.

“But we will be running them in order to thank our incredible production team for keeping us on air for the past 15 weeks.”

Phil continued: “We often talk about our This Morning family on screen but that family genuinely extends behind the scenes.

“We’ve all kept each other going through these very tough times.

“So we wanted to say thank you to the producers, the researchers, the director, the editor and all the amazing crew here on the studio floor.

There's been a spillage in the studio! 🍦 #ThisMorning pic.twitter.com/eMTq3n8syT

“And also the many more that have been working from home.”

Phil told Holly: “Hopefully, when we come back in September, I can give you a bloody hug.”

Holly replied: “I hope so. That would be really nice, I really look forward to it.”