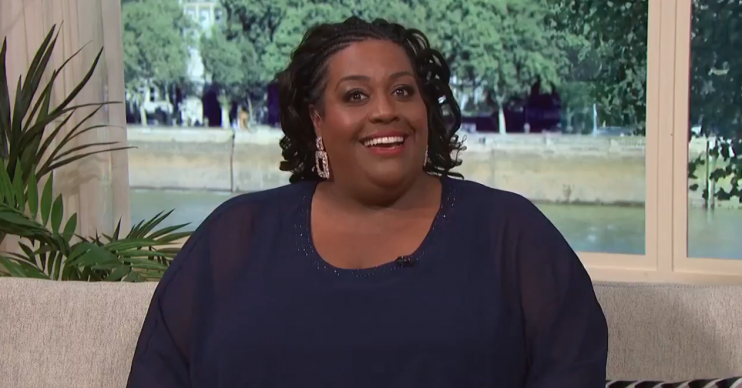 Ruth Langsford and Eamonn Holmes were not impressed, either

Presenter Alison Hammond was given a polite brush off by Ruth Langsford and Eamonn Holmes earlier today after her impersonation of a celeb pal bombed on live TV.

Stand in hosts Ruth and Eamonn endured an awkward segment with impressionists Jon Culshaw and Jan Ravens following a mix up which saw the anchors unimpressed by their guests’ attempts at taking off celebs such as Simon Cowell and Donald Trump.

But it was This Morning regular Alison’s attempt at mimicking Stacey Solomon that really left viewers cringing, with Ruth tactfully suggesting her brief performance was not ready for telly.

In separate segment to the interview, Alison, 44, was asked who she could impersonate.

A hesitant Alison volunteered: “I’m not very good… I can do Stacey Solomon.”

But Alison’s stilted delivery of an Essex accent failed to convince.

“Alright? How’re you doing? I’m Stacey. I love you!” she laboured.

Read more: EastEnders’ Louisa Lytton gives fans a glimpse of her luxury holiday in the Maldives

Asking how she had done, Alison was met with a scoff from Ruth before she shook her head and Eamonn’s grin spread across his entire face.

Those watching at home did not seem to be wowed, either.

“Sorry @AlisonHammond2 you are rubbish. Give up impersonations!” tweeted one.

“Don’t give up the day job Alison,” said another.

A third contributed: “It’s a bit Natalie Cassidy as well.”

However, there were some viewers who Alison did win over.

“Better than the guests, so called professional what a load of rubbish, Alison was great,” remarked one.

Another commented: “Not bad good effort.”