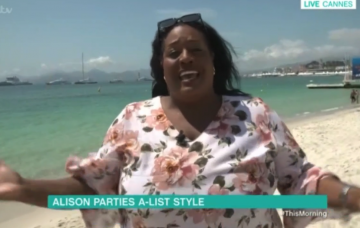 Alison Hammond gets asked out by Hollywood star!

She was pretty chuffed!

Alison Hammond has caught the eye of yet another Hollywood hunk!

Fans may recall, Alison enjoyed a ‘romantic date’ with Hugh Jackman last year as well as ‘tying the knot’ with Dwayne “The Rock” Johnson in a faux ceremony.

Now, she’s been jokingly asked on a date by Beauty and the Beast heartthrob Luke Evans – and even got an offer from Cheryl’s ex Jean-Bernard Fernandez-Versini, too!

As she took to the red carpet during the Global Gift Gala, a charity event in Cannes, Alison had her eye on one specific actor – Luke Evans.

Quizzing Luke on his love life, Alison asked: “There is an auction tonight, have you got your eye on anything in particular?”

“Are you up for auction tonight?” he cheekily replied.

“Well, I was thinking about putting myself up for a date,” Alison said. “Would you pay for it?”

But it seems Luke may have some competition.

Alison then spoke to French restaurateur Jean-Bernard, who was previously married to Cheryl from 2014 to 2016.

“You and me are going to get along so much,” Jean-Bernard told the presenter.

“I love you already,” Alison gushed. “I heard you’re single, and I’m single!”

She then asked the star if he would be linking up with Chezza as she’s expected to arrive in Cannes in just a few days.

“No,” he said. “There are things that are more important during this trip.”

“Like going out on a date with me,” Alison cut in, to which Jean-Bernard replied: “Yeah, why not!”

Earlier this week, the presenter announced she will be lending her voice to a character in Hotel Translyvania 3: A Monster Vacation.

“I’m being serious – a lot of people think I’m joking around – I’ve actually got in a Hollywood movie!” she excitedly told Holly Willoughby and Phillip Schofield on Wednesday.

Revealing details about her character, Alison continued: “She’s beautiful, she’s got a sexy body, red hair and I’m going to have a love affair with Adam Sandler’s character.”

“I’m actually quite nervous because this is serious,” she added. “This is going to be so weird!”

Are you excited to see Alison take Hollywood? Let us know what you think of this story by leaving us a comment on our Facebook page @EntertainmentDailyFix!