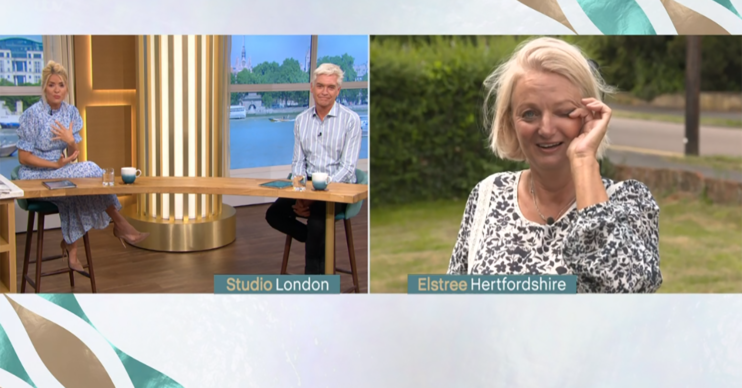 She hasn't seen him because of the coronavirus lockdown

Alice Beer became emotional as she surprised her dad on This Morning after 12 weeks of not seeing him.

The consumer expert explained she hasn’t been able to visit her dad since the coronavirus lockdown began in March.

Ahead of Father’s Day this weekend, Alice turned up at her parents’ home to surprise them.

“You just can’t hug anyone can you? It’s a strange thing. It’s all very weird.”

At least you’re not in your pyjamas, you are in your slippers though.

Alice then walked up to her parents’ home and rang the doorbell.

Her dad opened the door and looked stunned.

He said: “It’s Alice! Hello, what are you doing here?”

Alice said: “I’ve come to see you. You’re live on the television.”

Her dad joked: “You could have warned me!” to which Alice said: “At least you’re not in your pyjamas, you are in your slippers though.”

He asked: “Are you going to stay?”

Alice said: “For a little bit in the garden, is that alright?” to which her dad said: “Yeah fine, could you use the back door?” as Holly and Phil burst into laughter.

As her dad went back inside, Alice could be seen wiping away tears as she spoke to Holly and Phil.

She said: “The apple hasn’t fallen very far from the tree has it?”

Alice said: “I know. You don’t know how relieved I am that he’s not in his pyjamas.”

Meanwhile, at the end of the show, Alice hosted a segment on Father’s Day gifts and her daughter made a surprise appearance.

Dora was hiding under a table and climbed out to the shock of Alice’s dad.

Have you reunited with your loved ones? Leave us a comment on our Facebook page @EntertainmentDailyFix and let us know.