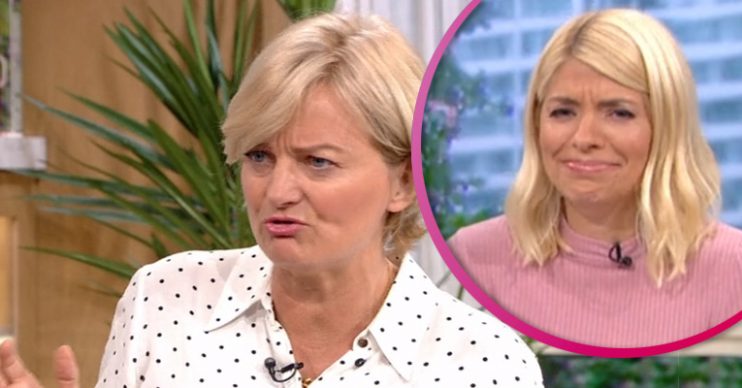 Alice Beer made a playful dig at Holly Willoughby after she scoffed a piece of chocolate cake on today’s This Morning.

During a segment on “mind-blowing food hacks”, Holly picked up the huge slice of cake and shoved it into her mouth before instantly regretting it.

Phillip Schofield was stunned by Holly’s efforts while consumer editor Alice began snorting like a pig as Holly tried to swallow the dessert.

Alice exclaimed: “You alright love?!” before snorting like a pig.

Later in the segment, Alice told off Phil as she showed off her egg-free meringues.

Alice replied: “Oh come on. That’s just rude. My daughter does that with her food anyway.”

Alice then showed the duo her avocado chocolate moose, which Holly didn’t seem too impressed about.

Holly said: “That tastes like avocado,” to which Alice replied: “Well it’s nice isn’t it?”

Mum-of-three Holly added: “I don’t know about that. Has it got banana in it?”

Alice replied: “For that, I’m not telling you,” before adding: “You’ve got chocolate on your teeth.”

On Wednesday’s show, Phil and Holly were left in fits of giggles when two dogs weed on the show.

The duo were joined by French Bulldogs Coco and Chanel, who after being found deserted in a shopping bag, are in need of a loving home.

But midway through the interview with Kirsty from Four Paws Animal Rescue, the dogs decided to do their business on set leaving Phil scrambling for tissues.

As one of the dogs started weeing on the carpet, Holly said: “Oops we’ve had a little accident. It happens when you get nervous on the telly sometimes, don’t you worry.”

Phil then reached for the tissues and placed it over the wet patch on the carpet.

Within seconds, the second pooch began doing his business on the floor and Holly exclaimed: “Oh the other one’s having a go!”