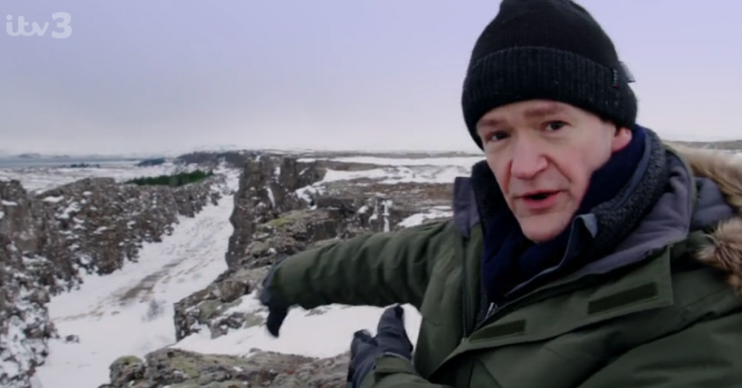 Alexander Armstrong in the Land of the Midnight Sun: Viewers in hysterics as ‘Ant and Dec’ pop up

In the middle of nowhere

During the second episode of the series, which first aired in 2015, the Pointless host embarked on a chartered flight from Iceland to Constable Point in Greenland, one of the world’s most remote airports.

What happened in episode two?

From there, he met up with two elite Danish soldiers who spend years at a time out on military patrol across the frozen wastes.

The pair rely on a team of dogs to get around. They explained that the animals eat just once a day.

The soldiers also demonstrated to Alexander how they get the dogs to sit before giving them chunks of a special type of food full of fat and protein.

The man then proceeded to shout something that sounded a lot like ‘Dec’ along with a phrase that sounded like ‘Ant and’.

Alexander, immediately noticing the similarity to the names of the presenting duo, started happily shouting “Ant and Dec!” as he chucked pieces of the food to the dogs.

One said: “@XanderArmstrong ‘Ant and Dec’. Ha. Love it! #LandoftheMidnightSun.”

Another wrote, alongside a string of laughing emojis: “Ant n Dec #landofthemidnightsun.”

A third quipped: “Those dogs are slightly more disciplined than Ant and Dec, though @XanderArmstrong @antanddec #landofthemidnightsun.”

Elsewhere in the episode, Alexander got to try his hand at a traditional form of Icelandic wrestling and went snorkelling in some of the world’s clearest waters.

He also wore a seal- and fox-skin outfit to protect himself against temperatures of -25C during a sled trip to a remote Inuit community.

Are you enjoying the repeats of the series? Leave us a comment on our Facebook page @EntertainmentDailyFix and let us know what you think of it.