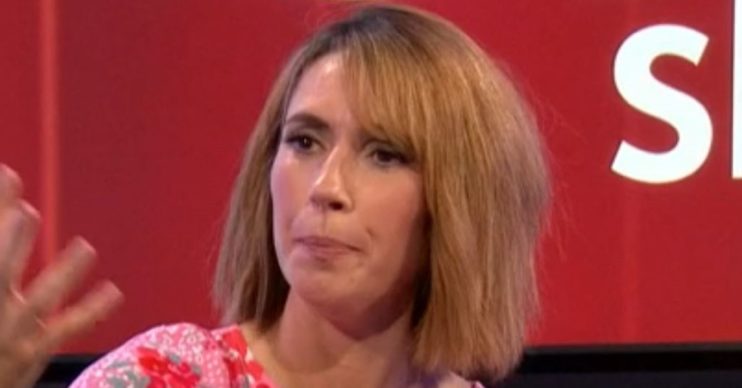 Alex Jones was having absolutely none of it when a viewer of The One Show hit out at her outfit on Friday.

The presenter, 42, was playing a game of Two Truths and a Lie with comedian Miranda Hart when she stumbled upon a comment from a fan that rubbed her the wrong way.

Alex was reading through some viewer messages in an attempt to tell the lies from the truths. And she spotted an insult directed at her summery outfit.

What did the viewer say?

“Hang on, did someone say, ‘Why is Alex in her pyjamas?'” said the BBC star.

Even though Alex looked miffed by the comment, Miranda Hart and Angellica Bell couldn’t hide their amusement at her sassy comeback.

It’s not the first time Alex has had issues with her outfit on the show either.

She jokingly apologised live on-air recently, declaring that her bright red mohair sweater was “going up her nose” and she was finding it difficult to concentrate.

It’s been a tough couple of weeks for the presenter.

During an episode of the show last week, the Welsh star accidentally cut her finger to the shock of the rest of the crew.

She proclaimed: “I gave myself a paper cut, and I’ve just got blood everywhere.”

But social distancing rules meant the crew couldn’t come to her assistance.

Holding her hands out, she said: “It’s just a paper cut – but I haven’t got a tissue.”

As Watchdog correspondent Matt Allwright explained, co-presenter Alex Scott would have to break strict government guidelines to go to her aid.

The One Show is filmed with just the hosts and a cameraperson in the studio to make sure social distancing rules are followed.

The show came under fire from viewers in March over Alex and Irish comic Patrick Kielty sitting too close together.