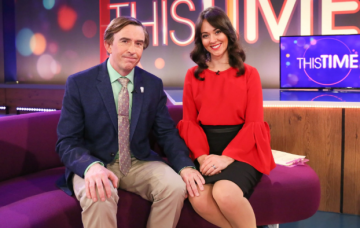 The parody presenter is back

Gaby Roslin, Shappi Khorsandi and Samuel West are among the stars who have hailed Alan Partridge following his “genius” return to the BBC.

The fictional broadcaster (Steve Coogan) returned to the corporation on Monday after 24 years, with a new, fictional magazine show called This Time.

Viewers welcomed Partridge and his blunders with open arms and posted plenty of praise on social media.

“Welcome back,” she wrote on Twitter. “In every single way that was brilliantly uncomfortable.”

Comedian Khorsandi said: “God that made me happy. Painfully happy.”

“I’ve watched more of tonight’s #AlanPartridge through my fingers than any episode of Doctor Who,” he posted. And had to leave the room once.”

Broadcaster Elis James posted: “Whatever the incarnation, there will always be jokes in an episode of Alan Partridge that leave me stunned. I loved it.”

“Long May you reign,” he added.

Author Matt Haig said: “The genius of Alan Partridge is that you actually kind of care for him, despite everything.”

Ahead of the programme, BBC staff received an email from their “colleague” Partridge.

The email, crafted completely in character, urged the thousands of staff who received it to tune into This Time With Alan Partridge.

It took a swipe at old enemies within the broadcaster, which sacked him for an on-air misdemeanour involving a turkey.

The message also mocked the corporation over its “know-nothing” staff, and support for elements of the British establishment.

It read: “Back I am, as evidenced by this, my own official BBC email address.

“And with it I reach out to you my colleagues – not to gloat, or settle old scores, or say ‘Hey Karen/Kate/Kath, why don’t you kiss my arse’ – but to be the bigger man and clear the air of any residual stench.”

Entitled Clearing The Air, the message also criticised the BBC through the pen of Coogan’s comic creation.

It stated: “I love the BBC and I always have.

“I think the BBC is great, and watch the programmes avidly, regardless of their quality.”