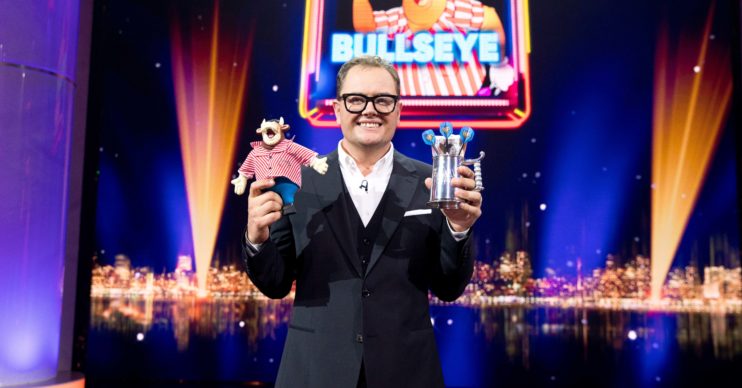 Viewers thought the jokes were bordering on discrimination

The Epic Gameshow mixes The Chatty Man’s trademark cheeky humour with popular game shows of the past, and lets contestants compete for prizes.

Whilst some viewers enjoyed the remake, some were left unhappy at some of Alan Carr’s jokes towards the official scorer, Richard Ashdown.

Alan referred to him as “The caller who wants to be taller,” and then when Richard came on stage, Alan said: “He’s so cute and little,” before grabbing his cheeks.

Epic Gameshow what did viewers say?

Although Richard took it in good humour, after some of Alan’s jokes got too much, some viewers took to Twitter to air their annoyance.

One shared: “Alan Carr taking the [bleep] out of the little fella a bit too much.”

Another agreed, saying: “Keep taking the [bleep] out of that bloke’s height it’s getting boring.”

Some viewers even thought the jokes bordered on discrimination:

Some viewers even thought that Alan Carr wasn’t up to par with original hosts Jim Bowen and Dave Spikey. One viewer tweeted: “#EpicGameshow has been entertaining, but I personally don’t think that Alan Carr was the right person for the job.”

Another shared: “Alan Carr’s Bullseye is terrible. The ‘dart players’ are terrible!”

One viewer even called out the show for being ‘fixed’ after watching in the audience:

I was in the audience of #EpicGameshow Bullseye.. it took 4 hours to film it all, and the end game was *coughs* fixed… personally dont find bullseye entertaining either

Alan Carr still a hit for some

Some viewers were big fans of The Chatty Man host and praised him for the primetime Saturday night show.

Good effort!! 👍🏻
Must admit we’ve enjoyed the “reboots” over the last weeks. Alan Carr has done a good job on them all #EpicGameshow

Alan Carr even makes Bullseye entertaining, it used to be the most boring Sunday night show but this updated version is good! @ITV #EpicGameshow #AlanCarrsEpicGameShow

Can we have Alan Carr doing #Bullseye #EpicGameshow every Saturday night please?

Some viewers loved the nostalgic show and even called for it to come back as a permanent feature. One said: “So many childhood memories of that show. Great to see it back on prime time TV.”

Another shared: “Gotta make that a series. Brilliant.”