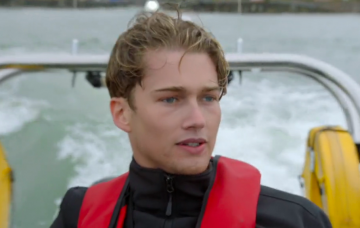 It was a tense final, as the professional trackers hunted down the remaining TV stars on reality show, Celebrity Hunted.

And viewers were blown away when Strictly Come Dancing professional, AJ Pritchard, outsmarted the experts, avoiding capture alongside MP Johnny Mercer for the entire 14 days!

The show uses military personnel and CCTV to locate ‘fugitives’ as they try to stay on the run for as long as possible.

Almost all the stars were captured throughout the two weeks, with Kem and Chris caught during the final episode, after they took three hours out to enjoy some spa treatments. They then enlisted help from boy band Union J, but were caught at a house.

AJ – who was initially partnered with gymnast Louis – managed to out-smart the professional hunters for 14 long days, with one of the former military trackers admitting: “Has he impressed me? Yes. I didn’t think a ballroom dancer would be giving me such a run-around at this stage.”

The 24-year-old dancer used his family network to escape capture and was emotional on the final episode as he admitted missing his mum.

He told the camera: “Mum is the only person I haven’t seen for two weeks. If I saw her now I’d burst into tears. I don’t even know why, maybe just because it has been stressful and it has been tiring and I haven’t been able to talk to her and she’s the person I would talk to every day.”

He added: “I’m doing it for Mum… It gets emotional when you know the end is so close.”

As the TV dancer and Johnny reached the end of the show, they celebrated with fizz as AJ called it an “emotional and physical rollercoaster – I loved it”.

He then added: “I can call my mum now and tell her I did it! She’s going to be so proud.”

The professional hunters moaned: “We were beaten by a Tory MP and a ballroom dancer, and of course that hurts.”

AJ took to Twitter after the show, to call it a “crazy experience”.

One wrote: “@Aj11Ace Watched Celebrity Hunted from the start & you were fantastic. Well done on beating the hunters. Xx.”

Another tweeted: “Well done to both @JohnnyMercerUK & @Aj11Ace on escaping and what a way to do it! Fantastic show & fair play to all the Hunters who did a great job Loved it #Hunted.”

A third added: “It was brilliant! I am so glad you beat the hunters! They were so condescending – they deserved to lose!”

AJ is currently appearing on Strictly, partnered with Paralympian Lauren Steadman for the BBC dance show.

They made history as the first couple ever to take on a Contemporary Dance routine to Beyonce and Naughty Boy’s track, Runnin’.

Last weekend, Lauren and AJ picked up a score of 34 for their Viennese Waltz.

How amazing was AJ? Who would’ve thought he had it in him…

Are you surprised AJ won the show? Leave us a comment on our Facebook page @EntertainmentDailyFix and let us know what you think.