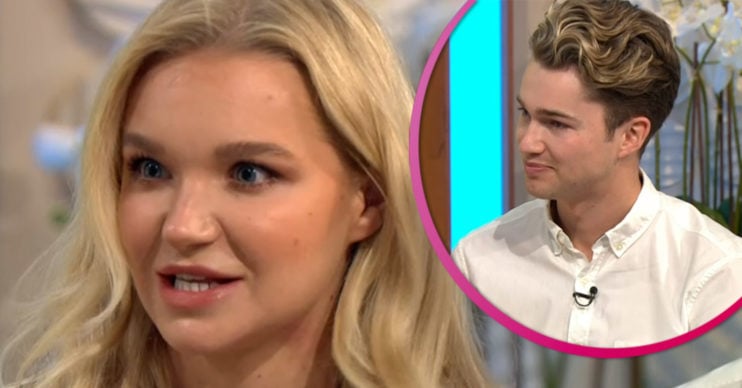 The Strictly star's partner was rushed to hospital for treatment

The girlfriend of AJ Pritchard, Abbie Quinnen, has recalled the moment she thought she was going to lose her life in a freak accident.

Abbie was involved in a freak accident while doing a social media stunt.

During the incident, her hair and clothes caught on fire.

What did AJ Pritchard and Abbie say?

The former Strictly star’s girlfriend appeared on Lorraine on Tuesday (May 4) to talk about her terrifying ordeal.

Abbie received second and third-degree burns while attempting to turn a wine bottle into a vase.

It was so bad that she needed three operations on her skin.

“I think AJ wanted to do this life hack, this home hack, what everyone’s been doing, to find something to do [in lockdown],” she told Lorraine.

“We watched the video straight before we did it. It was step-by-step and everything but unfortunately it just went horribly wrong.

“I was stood about four metres away from AJ and it went up, straight away. It went straight across the room and it caught my hair instantly. Then unfortunately my body as well, my clothes.

“At the time, when I was on fire, I was just thinking, ‘How can I survive, how can I get myself out of this situation?’

“I don’t actually remember it being that painful. I think I was just in shock.”

AJ said that the incident felt like it lasted “a lifetime” even though it was all over in just a few seconds.

He said: “I think what’s really scary is her clothes caught alight. Her hair caught alight and it all happened so fast, yet felt like a lifetime scenario.

“As soon as the fire on her body, her hair, and skin was out we covered her in damp towels. We called 999, we did everything that we thought was the right thing to do.”

Abbie added that she was terrified that she would be left with permanent scarring that would impact her career as a performer.

What did AJ Pritchard’s fans say?

Fans rushed to compliment Abbie for being so brave and sharing her story.

Alongside a behind the scenes snap on Instagram, one fan replied: “So proud of you always, you were amazing! What you both have is so special!”

A second said: “I think you are stunning and look phenomenal. I only wish I looked half as good as you!

“Wear your skin with pride, those who troll deserve no air time!”

A third added: “So brave today, loved watching you.”