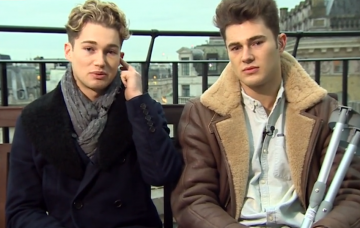 AJ Pritchard confirms he is doing the Strictly tour

The dancer has responded to rumours he's quitting

AJ Pritchard has confirmed he will be going on the Strictly tour despite claims he’s hired a bodyguard as he fears for his safety.

AJ and his brother Curtis were attacked in a nightclub by eight men on Boxing Day.

They appeared on BBC Breakfast on Thursday (3 January) to say rumours AJ would quit the Strictly tour aren’t true.

“The support has been overwhelming. Yes, I will be going on tour, and I have my own tour,” he revealed.

“The fans have been what have helped us throughout. It makes you scared and anxious. I am sure I will be fine soon.”

Curtis also told how he has now had surgery on his knee and hopes that he should be dancing again soon.

“I had the operation, which went fantastic, I start physio today and I should be walking within three weeks, and in four to five weeks I should be dancing again.”

The dance siblings were allegedly set upon by a group of up to eight men, leaving Curtis with torn knee cartilage and the pair with several bruises.

It has now been claimed AJ is so “traumatised” by the attack that he’s hired security to make sure he’s safe in public in the future.

A TV source told The Sun’s Bizarre: “AJ has hired a bodyguard to protect him over the coming weeks. He has been left traumatised by the assault, and while his confidence is growing he feels really nervous about the idea of going out in public.

“He’s worried about a possible revenge attack and wanted to have someone with him for the next month or so to help make him feel safe again.”

Both AJ and Curtis have been vocal about the attack, and whilst the pair wanted to speak out to condemn their alleged attackers, AJ is concerned they could now be targeted again.

The source continued: “AJ wanted to speak out about everything that happened but knows it could have made him a target again. He’s not taking any chances.

“The pair are keen to make sure the perpetrators are brought to justice and are working with the police to try to identify their attackers on social media.

“They don’t like the idea that these blokes are on the loose and could harm others.”

Meanwhile, 24-year-old AJ recently revealed he now fears going out in “larger crowds” after the attack.

Speaking on This Morning, he said: “It [the incident] has made me very aware of putting myself in a scenario of larger crowds.

“The really sad thing in this scenario was that we were just out to have a good time, and it came from nowhere.

Are you pleased AJ is going on tour? Leave us a comment on our Facebook page @EntertainmentDailyFix and let us know what you think.