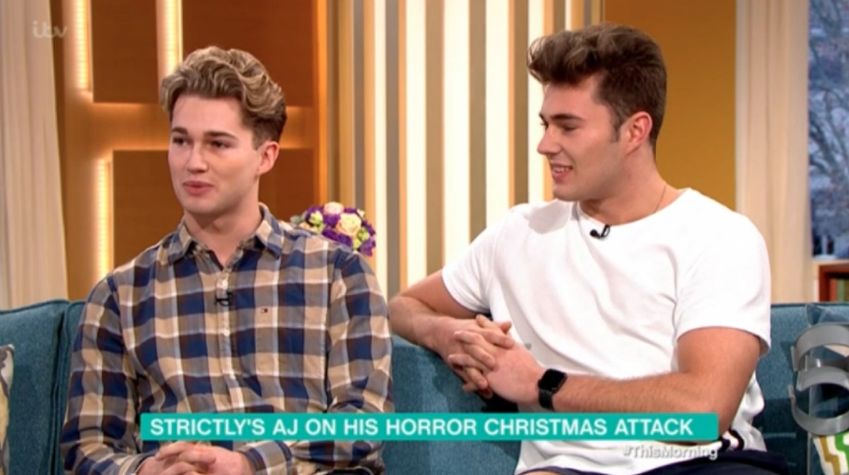 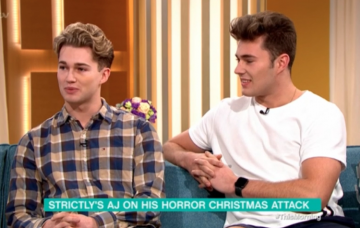 They still don't know why it happened to them

Strictly Come Dancing’s AJ Pritchard and his brother Curtis have given their first interview since the violent attack they suffered over the festive period.

The siblings were celebrating with friends and family at their local nightclub in Nantwich, Cheshire, when they were set upon, and now they have explained the effect the brutal attack has had on them.

Speaking to Ruth Langsford and Eamonn Holmes on This Morning today, Curtis, who quit his job on Ireland’s Dancing With The Stars after the attack, said: “We were minding our own business, we were out having a fantastic night… all of a sudden I have a push to my right – ”

AJ, 24, added: “By the time Curtis went to look who pushed him he was already punched in the face, blindsided from the right.”

Curtis, 22, continued: “I’m lucky AJ was there because if I’d stayed stood where I was I would have been in a lot of a worse way.

“AJ managed to get me out of the situation,” while AJ explained that he suffered fewer injuries because his brother was “protecting” him and took the “full brunt” of the blows.

With my real life superMAN – closes 2018 on a SUPER Positive note.”Thank you for all the love & support over the past few days. Thank you to each & everyone of the thousands of messages we have received. Yes it is a vile situation, but honestly the love has been overwhelming 🙏🏻”, pic.twitter.com/uyLALsgXtS

When Ruth asked: “Did you fight back at all?” AJ replied: “Absolutely not.”

The Strictly professional went on: “I think the really sad thing about the scenario was we were just out to have a good time, see each other as brothers and family, and it came from nowhere.

🤣🍌 Laughing our way into your first tv appearance together.. 🙈 @thismorning 10:30am soon. @curtispritchard12

Curtis added that they have no idea what provoked the attack against them and said perhaps it was “jealousy”.

Curtis has had to have surgery on his knee after taking several kicks to his body.

He explained: “I tore the cartilage on the inside and the outside of my knee.

“I’ve had to pull out of Dancing With The Stars.”

Meanwhile, AJ has admitted that the incident has left him feeling uneasy about big crowds.

He said: “It’s made me very aware of putting myself in the scenario of large crowds, obviously I’ve got the Strictly tour coming up. I will think twice.”

It’s believed eight people were involved in the attack on the boys. The investigation is ongoing.

A source told The Sun: “The brothers were having a relaxed evening with friends and AJ was posing for selfies with a few fans.

AJ thanked fans for the “overwhelming support” but he also pointed out that far too many similar incidents are happening all over the country and passionately insisted: “It has to stop.”

What do you think of the boys’ ordeal? Leave us a comment on our Facebook page @EntertainmentDailyFix and let us know what you think.