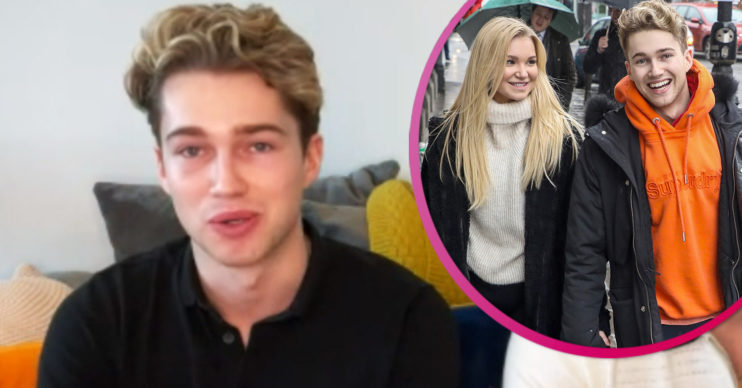 Abbie Quinnen was rushed to A&E after becoming engulfed in flames following a social media stunt which went wrong.

Appearing on Tuesday’s This Morning, dancer AJ and his brother Curtis Pritchard spoke about the horrifying accident.

What did AJ Pritchard say about his girlfriend?

When asked about her recovery, AJ said: “Regarding moving forward with the recovery, the doctors have talked to us but they don’t know.

“Further down the line, there’s the option to have laser but right now it’s just focusing on what we can do each day.

“Seeing them small improvements which feel like massive steps for her.”

The doctors have talked to us but they don’t know.

He explained: “The thing was to turn a wine bottle into a vase. There’s a tutorial to follow online.

“Unfortunately, it went horribly wrong. What’s really scary is her clothes caught alight, her hair caught alight and it all happened so fast yet felt like a lifetime.

What else did AJ say?

“When it happened, the most upsetting thing is seeing somebody you love on fire and being so helpless in such a moment.”

He added: “As soon as the fire on her body, her hair, her skin was out, we covered her in damp towels and called 999.

“We did everything  that we thought was the right thing to do and get her to A&E as soon as possible.”

AJ admitted handing her over to doctors left him “emotionally torn”.

He said: “I sat outside the hospital all night knowing she wasn’t even going to come out that night.

“Just sat there, I didn’t know what to do. I couldn’t go into hospital because of Covid but I just waited for her.

“She stayed in hospital for five nights, moving from healing to the intensive care unit.”