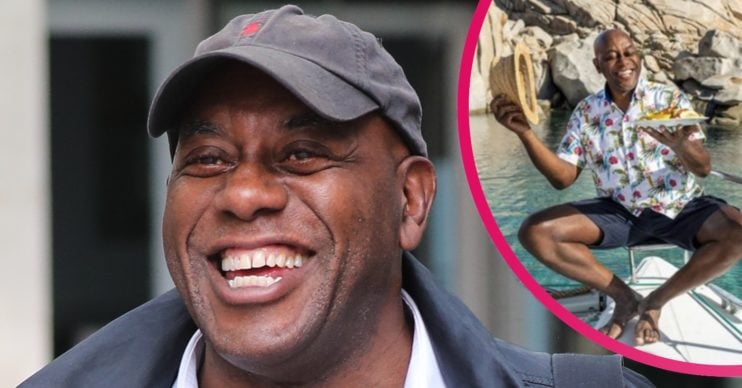 Find out where to find the best Ainsley recipes out there!

Veteran chef Ainsley Harriott is renowned for his delicious and versatile recipes.

Now it is being shown again on ITV.

But where can you get old Ainsley Harriott episodes from? And what’s he cooking up on tonight’s episode?

Where can I find Ainsley Harriott recipes?

Ainsley Harriott recipes are available for free on his own official website.

At AinsleyHarriot.com there is an extensive recipes section.

Meanwhile a massive selection of his recipes are available at BBC Food.

Of course many of Ainsley’s recipes can be discovered across his many television shows.

Or within his numerous bestselling books. Past publications include Ainsley’s Mediterranean Cookbook, Ainsley’s Caribbean Kitchen and The Feel-Good Cookbook.

What’s on the menu on Ainsley’s Mediterranean Cookbook tonight?

In the repeat episode of Ainsley’s Mediterranean Cookbook on ITV tonight, he travels to the beautiful Italian island of Sardinia.

The episode’s synopsis reads: “Chef Ainsley Harriott visits the Italian island of Sardinia. He takes a pasta masterclass with hosts Erica and Alessandro, who teach him how to make a uniquely Sardinian pasta shape called Jiusoni, which he then uses in his sausage and fennel pasta recipe.

“He then cooks up a true Italian classic with a Sardinian twist – fregola minestrone.”

Is Ready Steady Cook coming back?

Ainsley hosted Ready Steady Cook from 2000 to 2009, taking over from Fern Britton.

Ready Steady Cook has returned but sadly Ainsley isn’t at the helm.

How much is Ainsley worth?

According to CelebrityNetWorth, Ainsley has a net worth of around $4 million. At the current exchange rate of the time of this publication, this is around £2.8 million.

When did Ainsley get into cooking?

Ainsley says he got into cooking as a child.

While writing for The Guardian, he said his first love was animals.

But he then moved on to food – and he talks to food in a similar way he does his pets.

He explained: “I’ve got a golden Labrador now, called Bobby, and I sometimes talk to Bobby just like Johnny Morris.

“His was one of those voices that we instantly associated with something – like David Attenborough – and it has stuck with me, so much so that I sometimes do it with food, too.

“I have a conversation with the ingredients when I’m cooking in the kitchen!”

Does Ainsley own a restaurant?

Ainsley doesn’t currently own a restaurant. But he’s worked in some incredibly prestigious ones in the past.

Prior to his television fame he served as head chef  at The Long Room at Lord’s Cricket Ground.

Are you a fan of Ainsley’s recipes? Let us know on our Facebook page @EntertainmentDailyFix.