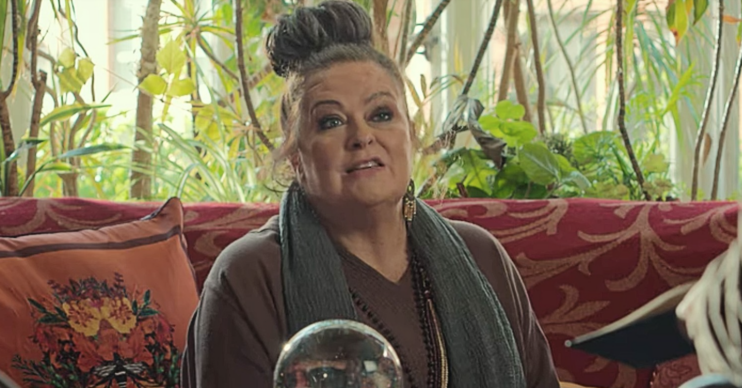 Kate is a scene-stealer in After Life

Kate Robbins appears in the third and final series of After Life on Netflix and she was a huge hit with fans.

So much so, that they’ve pleaded for her character to get her own spin-off series.

In addition to her scene-stealing in After Life, Kate has enjoyed a distinguished career. So how did she become famous?

Who does Kate Robbins play in After Life?

And every time Penny appears in the final series she chews up the screen.

Read more: After Life season 3 reviews: What are the critics saying about the final series?

As she explained that she is a medium, Tony spots a pile of books on her ornate coffee table.

What are fans saying about After Life star Kate Robbins?

Viewers are loving Kate’s portrayal as the barmy, over-dramatic writer.

So much so that some are pleading for Penny to get her own series.

On Twitter, one viewer said: “New series 3 of after life?!”

Another added: “Fantastic! My favourite comedy has gone up a level.

“Penny should be given her own show or at least a regular spot on This Morning. Great performance x”

A third exclaimed: “Wow!! You were brilliant!! Surely earned a spin-off series.”

Finally, one viewer wanted – after seeing Penny at a book reading in the series finale – to actually buy one of Penny’s books in the real world.

“Please tell me you’re releasing the books,” they said.

How did After Life star Kate Robbins become famous?

It’s no surprise Kate has stolen the show in After Life.

Thanks to a distinguished and long career in comedy and entertainment, Kate is a dab hand at bringing crazy characters to life.

She and sister Jane were the UK’s entrant into the 1980 Eurovision song contest. Singing Love Enough For Two as the group Prima Donna, Kate and Jane finished third.

A year later she scored a hit single with More Than Love, which reached number two in the charts.

Around this time, her acting career also took off.

Kate appeared in the legendary ITV soap, Crossroads, in 1982, and later that decade she scored her own comedy sketch show on the same channel – Robbins.

Also an ace impressionist, she also provided voices for Spitting Image – Princess Diana, Princess Anne, Sarah Ferguson and the Queen herself being part of her repertoire.

What else has Kate been in?

Since her 1980s success, Kate went on to star in some legendary comedy series.

She played Babs in series two of dinnerladies, BFF of Petula Gordeno (Julie Walters). In fact, Kate reunited with Victoria Wood for Victoria Wood With All The Trimmings.

Other credits include Phoenix Nights with Peter Kay, both Casualty and Holby City and Heartbeat.

And her most recent roles before After Life?

Appearing on Celebrity Gogglebox with daughter Emily, and as Jen Glover in EastEnders.

What are Kate’s famous family ties?

Kate is from a performing family, with sisters Amy, Emma and brother Ted also actors and performers.

Her other sister, Joan, is a sculptress.

And the Robbins family performing genes seemed to have been passed down a generation.

Kate’s daughter Emily is following in her footsteps.

Now one of the most recognisable faces in the UK, Emily found fame thanks to The Inbetweeners, Dancing On Ice, I’m A Celebrity, Celebrity Juice and, like her mum before her, her own ITV2 sketch show.

And, ahead of her mum’s appearance in After Life, Emily was one proud daughter.

Taking to Twitter, she said:  “Just sat down with a bowl of wine about to watch series 3 of #AfterLife – extra excited to see my wonderfully brilliant mum @KateRobbins playing new character, called Penny – I’m crying already!!

“I could burst with pride. HAPPY FRIDAY TWITTER GANG!”

On a recent episode of Loose Women Emily said about Kate: “It’s weird because I do act like best friends, but still I don’t sit there and say my mum’s my best friend, that doesn’t really cover it.”

Kate added: “We get drunk together, it’s very important to teach her how to drink rosé!”

Is Kate married and does she have any other children?

Kate was married to musician and film score composer Keith Atack until 2008.

It was then they ended their 19-year marriage.

Emily spoke to the White Wine Question Time podcast about her parents’ divorce.

She said: “I would say with my parents’ divorce, that’s something that me and my brother and sister, we never really got over it properly because it was so traumatic for us.

“I couldn’t cope. None of us could really, me or my brother or my sister… We went off the rails for a while.”

While they were together, Kate and Keith had three children: Emily, talent manager Martha and musician George.

What is Kate’s link to The Beatles?

Her late mother, Bett, is a first cousin of Paul and in 1960, the star and fellow Beatles legend John Lennon performed in Bett’s pub in Reading as The Nerk Twins.

“He was very close to my grandma,” she told Jonathan Ross on his chatshow.

“He was present in my childhood. He’s a family man, he’s wonderful. I remember running around in my nappy in his house.”