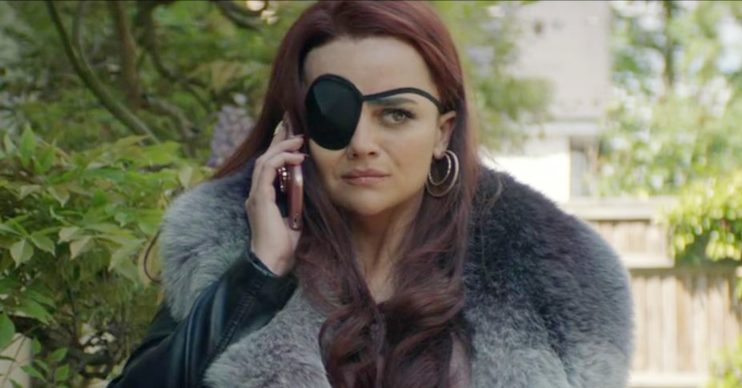 Adult Material cast list and what is a rosebud scene?

Adult Material is the latest dark drama to hit our sceens.

Viewers gain an insight into her life as she juggles motherhood and the seedy aspects of work on set.

The explosive series starring Haley Squires continues tonight at 10pm or, if you can’t wait, it’s available to binge watch on All4.

Here is everything you need to know ahead of Episode 2…

However, it is not all glitz and glamour…

So far we’ve seen her catch chlamydia in her eye, have a meltdown live on television and fight with her doting partner.

Hayley is an English actress and playwright.

You may recognise her from Call the Midwife, Collateral and The Miniturist.

The risque drama is her first lead role.

Her first day on set does not go as planned.

This is not Siena’s first TV role, the actress has taken on parts in Sky One’s Temple and ITV’s Vanity Fair.

Joe is one of the most famous cast members and you will recognise him for his roles as Chris in Skins and Gendry in Game of Thrones.

Kerry plays MP Stells Maitland who is campaigning against pornography.

She is later caught downloading sexy videos and putting them through on expenses!

Kerry’s face may be familiar to fans of Derek and Our Girl.

She also starred alongside Rick Gervais in Netflix series After Life, as Lisa.

Her mum’s career is a never ending source of humiliation for Phoebe, with one scene showing classmates throwing round a latex replica of Jolene’s private parts.

Alex’s previous credits include Les Misérables and The Rebel.

While Rupert should need no introduction, if you are struggling to place him, he starred in My Best Friend’s Wedding, Stardust and An Ideal Husband.

Julian has been in Downton Abbey and Netflix’s The Crown.

Phil is most famous for playing Kevin in EastEnders.

You can also catch him in Quadrophenia, Call the Midwife and The Mallorca Files.

Adult Material is one of her first TV roles.

It is later revealed that there was a “rosebud”, incident and Amy suffered a prolapse.

Why has Adult Material been controversial?

The first episode of the show left some viewers less than impressed.

Those watching along at home took to social media to accuse Channel 4 of using a misleading trailer.

One Twitter user said: “Was NOT expecting the first episode of #AdultMaterial to be what it was, trailer made it look like a comedy.”

Another agreed: “Anyone else feeling overwhelmed and confused? How can two rapes be in a supposed ‘comedy?’ The trailer didn’t give a “dark drama” feel to it.”

However, many fans praised Adult Material for bringing up important discussions around consent.

One shared: “#adultmaterial has started some really important conversations that should have been had years ago. This is an important British drama.”

Being a mum can be hardcore…catch new drama Adult Material tomorrow night at 10pm #AdultMaterial pic.twitter.com/GrgO5yfwpY

Questions ahead of episode three of Adult Material

What happened to the rosebud tape?

What will happen between Tom Pain and Amy?

Will Jolene find out what Amy told Gabriel?

Find out in the next episode.

Adult Material continues on Channel 4 every Monday at 10pm.