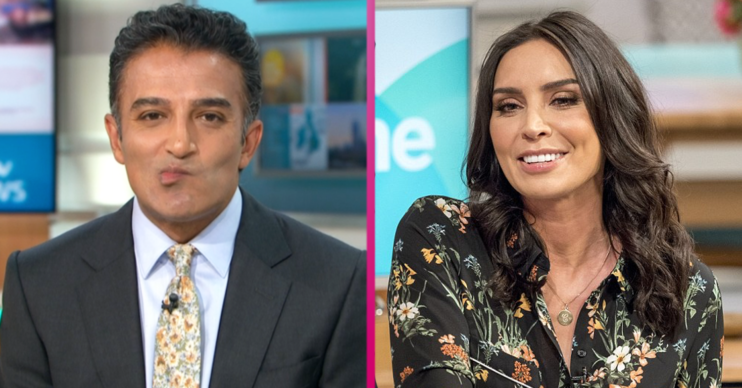 The Good Morning Britain presenter joked that he was planning to slide into her DMs later on.

Christine is currently filling in for Lorraine Kelly on her ITV breakfast show while the host is on holiday.

Shortly before Lorraine starts, she appears on GMB ever morning to tease what’s in store on the show via a video link.

When the star, who is married to Chelsea FC manager Frank Lampard, came on GMB this morning, Adil couldn’t resist playfully flirting with her.

The comedian joked: “I still get excited when Christine likes one of my posts on Instagram.

“Honestly, it sends me dizzy Christine!

The comments caused Christine to burst into laughter as she played along.

She told Adil: “Well you’ve just made my day knowing the impact I have on you.

GMB host Ranvir Singh wasn’t the biggest fan of the exchange and was quick to make a joke at Adil’s expense.

Interjecting the conversation, she told Christine: “I’ll keep him away from you in the corridor don’t worry, I remember our chat from last time!”

Read more: Ranvir Singh reveals her jealous side after calling out Adil Ray live on GMB

Not that Adil was deterred by Ranvir’s comments.

Ignoring what she said, he then joked to Christine: “I’ll be siding into the DMs!”

With that, Christine burst into awkward laughter as she put her face in her hands.

She is also stepmother to Frank’s two older daughters Luna and Isla.

It is not known whether Adil is currently in a relationship.

The Citizen Khan star is tight-lipped when it comes to his personal life.