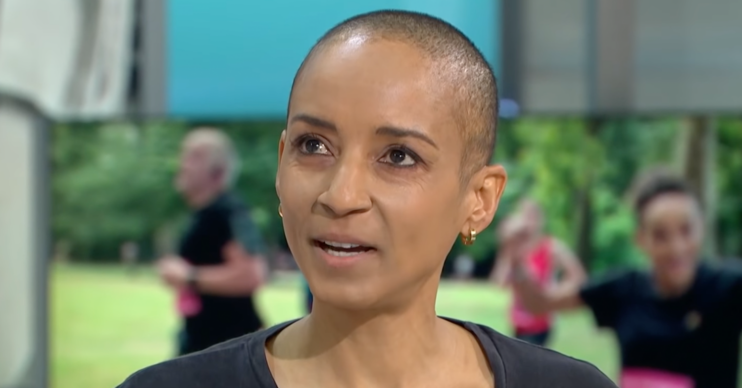 The brave star is so nearly there

DJ Adele Roberts has shared a sad confession with fans as she continues her cancer treatment.

The Radio One presenter took to Twitter to reveal her latest health news with fans.

Adele – who appeared on I’m A Celebrity in 2019 – was diagnosed with bowel cancer last year.

Adele, 43, revealed she’s being forced to open bottles with her mouth as she’s suffering from “hand and foot syndrome”.

Read more: Adele Roberts to undergo surgery to see if cancer has spread

Earlier this week, she told her 60,000 followers: “Down to opening bottles with my mouth due to hand and foot syndrome.”

Adele explained she was trying to avoid waking up her partner Kate to help her.

“Don’t want to wake up Kate at stupid o’clock to help me. One week to go and then I can start my final cycle of #chemotherapy. Cannot wait.”

She explained that her hands and feet hurt from the effects of the treatment.

I actually couldn’t get my brain to work or function.

She typed: “It’s a constant balance of drinking, but also being brave enough to walk on my feet to the toilet.

“It even hurts my hands to use the flush and wash them. Nearly there!” she said.

Blistering and redness on the hands and feet is a side effect of some chemo drugs.

Down to opening bottles with my mouth because of hand & foot syndrome. Don’t want to wake Kate up at stupid o’clock to help me 🙃 one week to go and then I start my final cycle of #chemotherapy 🎉 Cannot wait!

Adele was diagnosed with bowel cancer last October, and has bravely shared her journey.

The star immediately underwent surgery to remove the tumour.

Adele has maintained a good sense of humour as she faces cancer head on, though.

This weekend she’s in the hot-seat answering questions on Celebrity Mastermind.

She joked her specialist subject was Uranus, adding: “Not really!”

It was filmed while Adele was awaiting news of her diagnosis.

Afterwards she wrote on Twitter and said: “It’s unbelievable how much Mastermind shuts your body down.

“I actually couldn’t get my brain to work or function, it was a struggle to speak, but what a special day and experience.”

Catch Celebrity Mastermind on Saturday BBC One, at 7.20pm.

What do you think of Adele’s update? Let us know over on our Facebook page @EntertainmentDailyFix