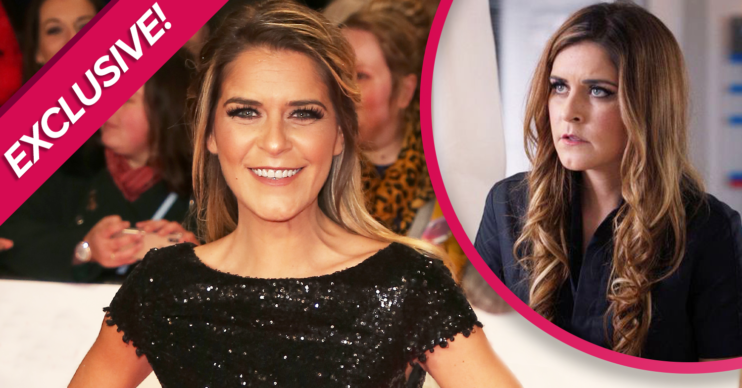 Come on BBC, make it happen!

Actress Gemma Oaten has revealed she’s eyeing a return to the cast of Holby City.

Gemma has played recurring character Sydney Somers in the show a handful of times since 2017.

And the former Emmerdale star has exclusively told Entertainment Daily that she’d love to return to the BBC medical drama.

What did Gemma Oaten say about a return to Holby City?

Asked if she’s like to return to a role in a soap, Gemma revealed: “Yes, I loved it.

“A lot of people look down their nose at soaps but it’s one of the hardest jobs technically and craftwise.

“The actors on those programmes are absolutely amazing and I would absolutely go back to another soap in a heartbeat. I’d love that. I just love performing.”

Asked which soap she’d like to join, following the death of Emmerdale character Rachel Breckle, Gemma ruled out Hollyoaks.

“I don’t think I’m a Hollyoaks kind of gal,” she joked, “although it might be quite nice to join as a glamorous character.

I’d love to return to my role in Holby City. You never know, there might be something there for the future.

“I’d love to return to my role in Holby City. I think Sydney was a character that many people really liked and took to and she’s not gone yet.

“You never know, there might be something there for the future.”

Gemma also revealed that she wouldn’t rule out an Albert Square role.

“EastEnders would be great because I think they need a northerner and also I live in London so that would be perfect selfishly.

“But equally Corrie, they’re a great team and it’s up north and it’s where my roots are and I know a lot of the directors there as they worked on Emmerdale with me.”

She added: “I couldn’t pick one, especially in this day and age where actors are scrambling over what’s coming up next.”

So what is coming up next for Gemma?

Does she have any acting work lined up?

“No, not at all being totally honest. I’ve no idea what’s round the corner,” she said.

“There’s talk of doing more TV shows around mental health and eating disorders and that would be amazing and I’m doing more public speaking. But I honestly don’t know,” she said.

‘I still want to act’

However, contrary to how she was introduced on Loose Women recently, Gemma is keen to set the record straight that she hasn’t given up acting.

“I’d just like to get back out there again,” she said.

“On Loose Women they introduced me as a former actress and I was like: ‘No, I still want to do stuff!’

“It’s not like I’ve swapped one for another. But I’ve become more involved with SEED during lockdown.”

Head to our Facebook page @EntertainmentDailyFix and tell us if you’d like to see Gemma rejoin the cast of Holby City.