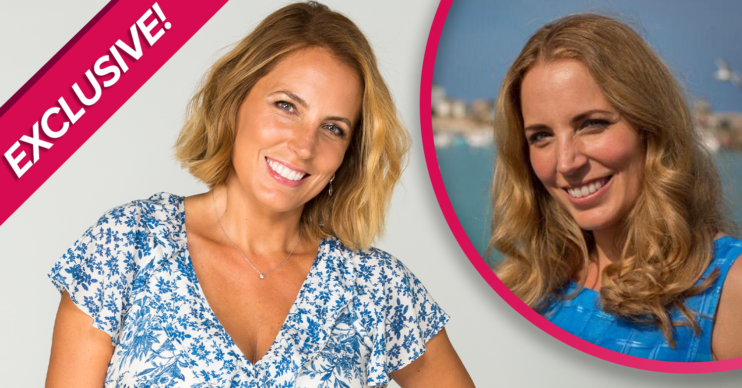 She felt the need to 'come clean' on social media

A Place in the Sun host Jasmine Harman has admitted she let herself and her fans down when she gained “extra flab” during lockdown.

Speaking exclusively to Entertainment Daily, Jasmine admitted that she felt “ashamed” of herself for hiding behind old photos on social media when fans had followed her journey to fitness.

As such, she took the difficult decision to post a warts-and-all before-and-after shot of her weight gain on Instagram back in February.

What did A Place in the Sun star Jasmine say about her weight?

Jasmine said she posted the before and after “mainly because I was really down on myself and feeling ashamed of myself and like I’d really let myself down”.

She added: “I know it sounds overdramatic and it’s only a few extra pounds of flab and we shouldn’t place so much importance on it, I know that all logically and I know it doesn’t matter in the grand scheme of things.

Read more: A Place in the Sun’s Danni Menzies gets ‘300 X-rated messages’ every time the show airs

“But I felt like I was hiding myself behind social media, sharing old photos, scared of actually showing myself as I was because I felt ashamed of myself.

“It sounds so stupid but I’d worked really hard and had done interviews saying this is it, this is me. I’m so committed to this fantastic healthy lifestyle, I love it, I love my exercise, I love the way I’m eating now.

“I never expected to go back to eating junk food and not exercising so I really felt like I’d let myself down and I was letting other people down who had been inspired by my weight loss journey.

“So I decided I had to come clean.”

‘I still have wobbles’

Jasmine revealed that she has started exercising again now and feels “much more positive”.

“At that time I knew I’d get there but I wasn’t there. So much of it is about mindset. I look at it and think it doesn’t matter but you still feel like it matters.

“I definitely feel more myself, I still have wobbles and moments of not being kind to myself but I think we all do that and that’s just part of life,” she added.

I am the oldest and fattest of the girls on the show.

So does Jasmine’s job in TV give her extra stress and worry about her appearance?

“No, not really. I love my job and I know I’m really good at it. I’m secure in my skills in that sense and can make a really fantastic show regardless of whether I’ve got a spare tyre or not.

“But it’s more just feeling good about yourself and feeling confident about how you look in your clothes.

‘I’m the oldest and fattest woman on the show’

“Although I am the oldest and fattest of the girls on the show, I don’t mind about being 45. I’m happy to be 45. For me I’ve never felt my age.”

With a host of new presenters joining A Place in the Sun over the years, ED! wondered if Jasmine ever feared she’d be “edged out” by bosses bringing in new blood.

“No, I never think they’re trying to edge me out – I hope they’re not,” she said.

Read more: Laura Hamilton hits back at reports she wants to leave A Place in the Sun

“I feel confident in my place at A Place in the Sun because I love the show, I’ve been doing it a long time and I feel very connected with it.

“I wouldn’t say I ever feel threatened by anyone in terms of my position at the show. The only thing that gets me is sometimes I think oh I’m so old or I’m so fat, being the oldest and fattest one of the girls.”

She continued: “It’s fine, I don’t agonise over it or lose sleep over it. But I do sometimes think, oh never mind, I’ll let the young people have their fun.”

Jasmine’s future at A Place in the Sun

So does that mean she’s considering stepping down from her role on the show and letting the “young people have their fun” without her?

“No, I’ll stay, I love it. It’s such a rewarding show to work on when people find the place of their dreams that they’ve been looking for for a long time,” she said.

“It’s so rewarding, I cry every time. I really get invested in it. When it works out well it’s so fantastic.”

Even though she calls herself the “oldest and fattest” woman on the show, Jasmine’s fans clearly adore her.

Which is sometimes a bad thing, she admitted.

“Everyone’s lovely on the show and on social media too – it’s embarrassing sometimes.

“People are like: ‘Are you married?’ or ‘You’re hot!’ I tend to ignore those ones,” she admitted.

“It’s always nice to get compliments, but if you put a photograph on there with a message of some kind and people are just saying oh you look hot or I like your dress, it’s like the message isn’t getting through.

“I mean, I like those comments, I appreciate those compliments as much as the next person. But for me it’s not just about how you look.

“We all have a responsibility to use those platforms to enhance the things we believe in and our values.”

Catch Jasmine on A Place in the Sun today (April 29) at 3pm on Channel 4. The series continues weekdays on Channel 4 at 3pm.

A Place In The Sun Channel 4 Exclusives Health Jasmine Harman