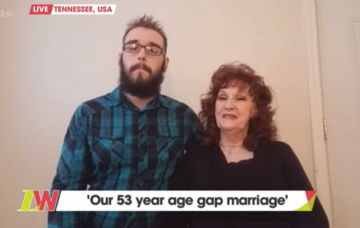 The married couple say it doesn't matter because they're in love

Loose Women viewers were left stunned today when the panel interviewed a pensioner aged 73 — and her 20-year-old husband.

Almeda and Gary Hardwick tied the knot two years ago and say they have a healthy sex life, despite their staggering 53-year age gap.

Gary is so young that he even has step-grandchildren who are older than him, but the couple say they all get along well together.

Speaking live via satellite from their home in Tennessee, Gary, who has had a previous relationship with a woman in her 70s, said: “We met at a pizza restaurant. I was getting ready to turn 18 years old.

“I’ve always been one to not actually care what people think because my motto is we all have a short life here on earth and we have to make ourselves happy.

“At the end of the day, it’s our happiness and everyone has their own way of happiness.

“We try to spread that around our social media and try to inspire others and let people know that they do have someone, regardless if it’s age, same-sex relationship, interracial couple.

“To the critics, I would just say we found happiness and there’s a lot of other age-gap couples who we can speak up for. Let us have our happiness.”

Asked what first attracted him to his elderly wife, he added. “Everything about her, her beautiful eyes, but mainly her personality. Her personality is just amazing in every way.”

Grandmother Almeda agreed it was love at first sight.

“We get along very well. His eyes just captured my heart,” she said, adding that her children were happy for them.

Gary said: “It all works really great. We connect so well.

“I’m always trying to help them with things and they help me with things so we have a great relationship. All of us get along very well.”

Before their wedding, they discussed the prospect of not having a long future together.

“We talked about that and we have a different outlook on that,” said Gary.

“My outlook is the fact that none of us are promised tomorrow, regardless of age.

“I could walk outside and get killed or get sick. We know that we have true love and happiness and that’s what matters now.”

But viewers were far from convinced the couple’s relationship was acceptable and voiced their opinions on Twitter.

However, Dancing On Ice judge Jason Gardiner, who was on today’s Loose Women panel, told the couple: “As a gay man, we are also under the scrutiny of what people think about whether or not that’s correct.

“I applaud you. I think love is love, and that could be across generations.”

Is 53 years too big an age gap? Leave us a comment on our Facebook page @EntertainmentDailyFix and let us know what you think!