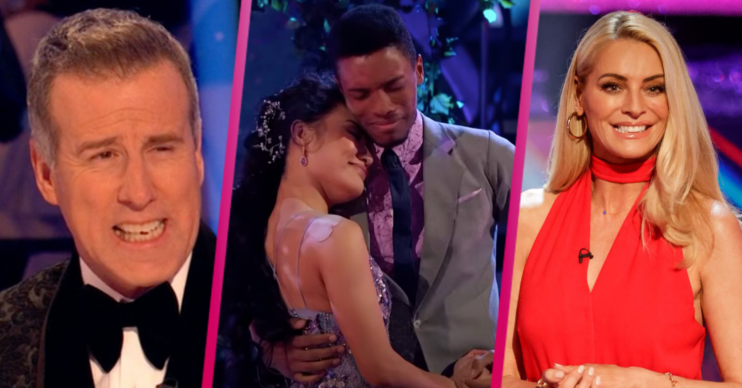 Moments during this series that have made Strictly fans erupt

Strictly Come Dancing 2021 is drawing to a close, with the show’s semi-final airing this weekend.

The series has seen lots of historical moments and memorable routines that we’ll certainly never forget.

However, there have also been moments that have left Strictly fans fuming.

‘Unjustified’ comments from the judges

Viewers have been furious about some of the comments made by the judges this series.

Many are saying that they don’t justify the extremely low scoring.

Craig Revel Horwood, for example, has given glowing reviews of some of the dances – but there’s been a distinct lack of his 10 paddle.

Motsi Mabuse and Craig have both been criticised over their comments about AJ Odudu.

And even Anton Du Beke, a much-loved Strictly veteran, has come under fire over his views.

The Strictly judges have also been under fire this series for their low scores, with fans claiming it’s some of the lowest scores we’ve seen.

Craig is famous for his strict judgements and harsh scoring.

However, some fans think that, this year, his scores were far too low.

During the 2021 series, Craig has even given scores of 4 when the other judges on the panel have given out 9s.

Fans were also fuming that the 9 and 10 panels have come out a lot earlier than usual.

One fan tweeted: “The scores are a bit skewed. The 10s and 9s used to come near the end.”

Some fans even claim that the scores are a “fix” as the show’s favourites are being way too overmarked.

Someone tweeted: “I think I could have done better than some of the ‘celebrities’ on #StrictlyComeDanicng tonight geeezzz! All overmarked! Shirley just overmarks.”

Another fan wrote: “Dan massively over marked for the second week in row #Strictly.”

Throughout the series, host Tess Daly has made many comments that have infuriated fans.

One comment Tess made that particularly angered fans was about Rhys’ emotional routine.

She asked him: “Are you crying honey? Are you? Are you having a little cry?”

Fans lashed out at Tess and claimed that she was being too patronising.

One fan tweeted: “How condescending did that sound from Tess?!”

Someone else fumed: “Tess is so patronising I can’t even cope with how she just spoke to Rhys on live TV.”

Some fans are also annoyed by the way Tess and Claudia Winkleman announce the judges.

One person tweeted:”I know that Strictly Come Dancing is fundamentally wrong and atrocious telly, but that bit where Tess and Claudia simultaneously say ‘The Judges…’ makes me utterly murderous.”

Some fans have also deemed Strictly “unfair” as some of the couples who’ve left the show for COVID reasons were able to return.

Loose Women panelist Judi Love and her professional partner Graziano Di Prima had to miss Strictly and self isolate due to Judi’s positive COVID test.

Tom Fletcher also had to self isolate and leave Strictly briefly in only the second week.

However, some fans were angry when the Strictly couples made swift returns the week after.

People claimed that it wasn’t fair that that Judi Love and Tom Fletcher were given another chance to reappear on the show.