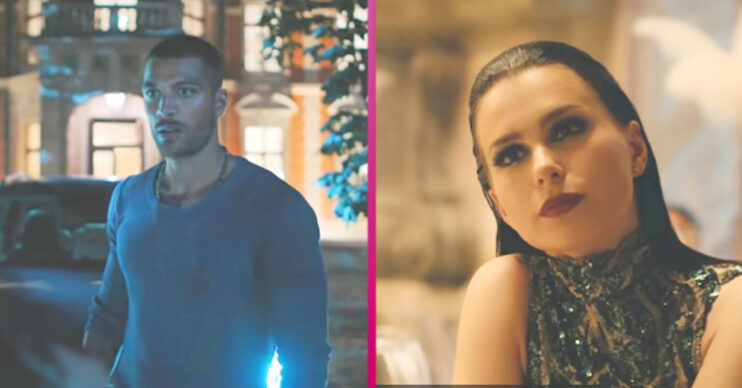 What have the cast of 365 Days: This Day done before the saucy Netflix film?

From modelling to the Medicis, the cast has been very busy indeed

The cast of 365 Days are back in Netflix’s hotly-anticipated sequel 365 Days: This Day.

Following Massimo and Laura as they navigate the world of crime, outlandish lingerie and more sex than anyone thought possible, the movie has audiences’ eyes popping.

The second in a mooted trilogy of sexy movies, This Day has proved massively popular with Netflix viewers and it’s not hard to see why.

The lush locations, the raunchy scenes and the completely outlandish twists and turns all add up to one hell of a ride.

Here’s everything you need to know about 365 Days: This Day’s cast, and where to find them, in a televisual sense, if you just can’t wait for the mooted third installment.

Believe it or not, This Day is Anna-Maria Sieklucka’s second movie role; the original 365 Days marked her movie debut. That doesn’t mean she’s new to the acting game, though.

The Polish star made her TV debut in the award-winning medical drama For Better or Worse in 2019, and is an accomplished theatre actor.

And no, she is not, apparently, dating her co-star, Michele Morrone.

Italian-born Michele counts singing, guitar-playing and modelling among his many talents.

In fact, he appears on both 365 Days soundtracks, singing original tunes. He’s also got several music videos under his belt, including Beautiful, Another Day and Hard For Me.

Outside of 365 Days, Morrone’s acting talents can be found in the Italian crime drama The Trial (Il Processo), which can be found on Netflix.

The gripping eight-part series follows events after the murder of a teenage girl in small-town Italy.

Morrone has also appeared in several Italian movies, most notably comedy The Last Day Of The Bull, and a biopic of Italian politician Renate Fonte, who was murdered by her political opponent.

You might also have spotted Morrone’s fleeting but powerful cameo in Netflix’s Medici series in 2019.

If you’re looking for Simone outside of This Day, you might have to go quite a long way.

That’s because the sequel is Susinna’s first-ever acting job. In fact, away from 365 Days: This Day cast, he’s mostly been a very successful model. At least, if his Instagram page is anything to go by.

While he might not have appeared in movies before, Susinna, 28, has appeared on Italian TV.

He was, in fact, a contestant on the Italian version of Survivor in 2003. Which, we’re sure, would be well worth tracking down somewhere.

But she’s probably best known for her role as Wanda in The Zookeeper’s Wife, alongside Jessica Chastain in 2017.

Lamparksa, 34, has also appeared in some of the best-named movies we’ve heard in a long time, including Tips For Cheating, in which some women develop an app that catches cheaters.

Then there’s How I Fell in Love With a Gangster, which charts the rise of one of Poland’s most notorious criminals, and Banksters, a movie that also stars another of the 365 Days: This Day cast.

But it’s mostly about how bankers are actually gangsters. In the movie.

One of the most prolific actors in the This Day cast, Otar Saralidze, 32, has literally been in everything. Well, almost.

From podcast dramas to TV series, movies, and video games, Saralidze has done it all.

Outside of his native Georgia, Saralidze is probably best known for playing Amir in Women Of The Mafia 2.

But he’s also appeared in over 100 episodes of Polish soap The Color of Happiness, and played Dato in 2021’s The Resting Samurai, an adultery-themed drama.

Playing Laura’s mother may well catapult Ewa Kasprzry to Netflix-levels of global fame, but for us, she’s already Poland’s answer to Meryl Streep and should be treated accordingly.

Kasprzyk has been appearing in movies since the 1980s, and her first credit – Medium – has been described as the best Polish horror film ever.

Since then, Kasprzyk, 65, has starred in an incredible number of movies and became an award winner when she took home a gong for her role in 2001’s Bellisima.

A dark tale about mothers and beauty pageants, Kasprzyk won Best Actress for playing, you guessed it, the mother.

And then there’s Banksters, the 2020 drama in which bankers discover a room that wipes guilt from your memory. And they use it to sell guilt-free one-night stands.

If this sounds familiar, it’s because Magdalena Lamparska also stars alongside Kasprzyk a full two years before This Day. Gotta love those acting connections, right?

365 Days: This Day is available to stream on Netflix, alongside the original movie, 365 Days.

Have you seen the 365 Days cast in something you loved? Let us know on our Facebook page @EntertainmentDailyFix.