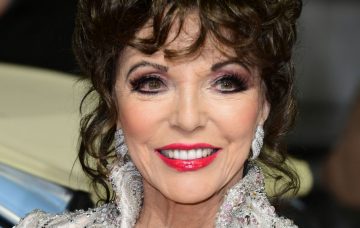 Joan Collins reveals why she turned down Strictly

The actress doesn't think it would be fun

For many, appearing on Strictly Come Dancing would be a dream come true – but not so for actress Joan Collins.

The 85-year-old has admitted she’s too old to be “thrown about” on the dance floor, and already has enough glitzy outfits in her wardrobe, thank you very much!

The Dynasty star told the Metro she’s turned down both Strictly and the U.S. version Dancing With The Stars.

She said: “A long time ago and I was asked to do the American one too, but I wouldn’t do it. I think it’s not dancing, it’s acrobatics, you know, and you have to be so acrobatic.”

She added: “And frankly I don’t wish to be thrown about at this age.”

The star went on to say that she has “no need to do it” and that it would be “no fun for me”.

While for some, dressing up in sequins and sparkly dresses is part of the appeal of going on the BBC show, the ever-glamorous Joan admitted: “Well, you know, I can get those outfits whenever.”

Although we won’t be seeing Joan on the Strictly dance floor any time soon, she’s certainly not taking it easy in her twilight years. She’s currently starring in TV show American Horror Story and recently appeared in The Royals and Benidorm.

This year’s Strictly comes to a close this evening with Stacey Dooley, Joe Sugg, Faye Tozer and Ashley Roberts all dancing it out for the glitter ball trophy.

Ahead of the final, Faye and Ashley have had to defend their previous dance backgrounds as giving them an unfair advantage.

Meanwhile, Stacey has been hit with claims she’s been a diva backstage and the crew can’t wait to see the back of her. Just as well for them then that Joan isn’t planning to go on the show, as she’s built up a reputation as being the biggest diva of them all!