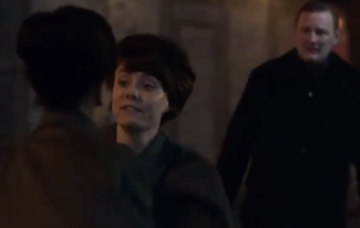 Call The Midwife fans got an early Christmas present when a clip from this year’s festive special was aired on Children In Need.

Viewers were “buzzing” with excitement and “can’t wait” for the episode, with nurse Valerie Dyer, played by Jennifer Kirby, returning.

It also features the show’s first black nurse Lucille, reflecting the influx of NHS workers from the Caribbean in the swinging 60s.

One fan tweeted: “Can’t wait! Best programme on the telly!”

Another wrote: “Love CTM and caught up on the last series’s in preparation for the Christmas special and the eagerly awaited next series.”

A third added: “Buzzing for the Christmas special.”

So glad to see Trixy back, where is sister Mary Synthia and Patsy?🎄✨❄

So looking forward to this!!

Buzzing for the Christmas special

I’m so excited its been such a long wait

The clip begins with Valerie’s evening with her fellow midwives being interrupted by an expectant father banging on the door calling for help.

They dash to help a woman who is having a “BBA”, or “born before arrival”, on the street.

Further details of the plot are a closely guarded secret, but pictures released by the BBC show Sister Mildred, played by Miriam Margolyes.

She arrives unexpectedly at Nonnatus House with four Chinese orphans who are found abandoned in Hong Kong.

The children are being adopted in the UK as part of a global refugee programme.

Helen George, who plays Nurse Trixie, is definitely back as she appears in the trailer that aired last night.

Call The Midwife’s Christmas Special will air on Christmas Day on BBC1, with series eight following in January and February, 2019.

Are you excited for the Christmas special? Leave us a comment on our Facebook page @EntertainmentDailyFix and let us know what you think!