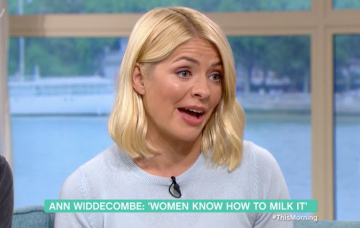 Holly Willoughby stunned as Ann Widdecombe blasts her for interrupting

Holly Willoughby was left stunned as ex-MP Ann Widdecombe told her off for interrupting on This Morning.

The host was challenging the former Strictly contestant’s controversial views on the #MeToo movement when Ann berated her for butting in mid-sentence.

Phillip Schofield saw the funny side and managed to stifle a giggle as the politician took his co-presenter to task, with Holly left looking sheepish.

Ann had told viewers that much of the #MeToo campaign was merely “trivial whingeing”, prompting Holly to ask: “Hasn’t that given women a voice finally, one that has been suppressed for such a long time?”

“No, I don’t believe that…” the ex-Conservative MP began to reply before the host asked: “Why?”

Clearly annoyed, Ann said: “I was about to tell you. Have the patience.

“Are you auditioning for John Humphrys’ job? I once asked him if he was paid by the interruption,” she added, referring to the host of BBC Radio Four’s Today programme.

Ann said women had “already won” their fight for equality but said they now wanted everything “tilted in their favour”, such as all-female shortlists for MPs and quotas for jobs.

“When I was graduating in the 1970s it was perfectly lawful for an employer to advertise a job with two rates of pay, one for men and one for women,” she said.

“It was lawful for that employer to say ‘We don’t take women’, it was lawful to refuse a woman a mortgage, a property to rent, finance agreement, just because she was a woman.

“The feminists of those days were shouting out ‘Give us equality, give us a level playing field’.

“In the 90s, that all changed. Instead of it being about ‘We want a level playing field’, it was ‘We want to tilt this playing field towards us’.

“Now we’ve got the whingeing #MeToo movement where women say ‘Five years ago a man put his arm around me and it made me terribly uncomfortable’.”

She said the campaign had been a source for good for “serious cases” involving sexual assault.

But Ann added: “It has given rise to a lot of trivial whingeing.

“You had recently an academic doctor, not a medical doctor, complaining because at an airport, instead of being referred to as Dr Smith, she was referred to as Mrs Smith.

Ann said she also disagreed with a proposal to ban wolf-whistling, adding: “Have we gone absolutely mad?

“What that indicates is we’ve won and instead of saying we’re going to build on that, we’re saying we mustn’t win, we must find other sources of grievance.

What do you think of Ann’s opinions? Leave us a comment on our Facebook page @EntertainmentDailyFix and let us know what you think!