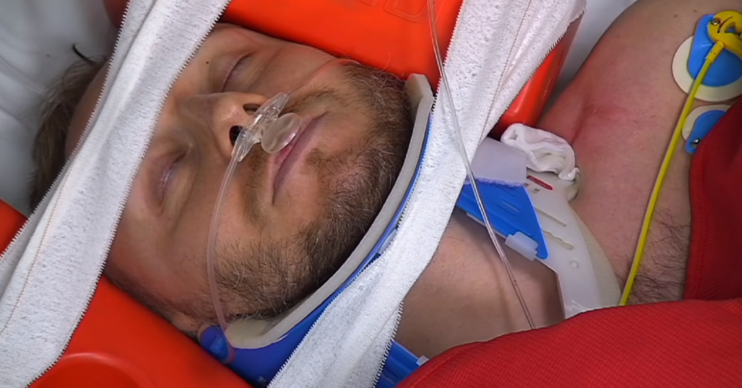 Many of those watching had to look away

Channel 4 viewers were left close to vomiting as documentary series 24 Hours in A&E showed a horrific wrist injury sustained in a motorbike accident.

In the first episode of the new series, aired last night (Tuesday, June 16), viewers met 35-year-old Przamek, who crashed his motorcycle at high speed into the back of another vehicle on the motorway.

Warning! This article features a graphic image of the injury

Paramedics rushed him to hospital via air ambulance. One of them explained to the doctors and nurses gathered around Przamek: “Significant damage to the back of the car and the front of the bike. His helmet was intact.

“Complaining of back back pain, abdominal pain and bilateral wrist pain. He has an open fracture in his right distal forearm and he had a displaced fracture of his left wrist.

At one point in the programme, viewers were shocked as it showed Przamek’s open-fracture wrist injury in full.

The graphic scene shocked viewers, who were heartbroken for the man.

One said: “#24hoursinaande that wrist injury has just made vom, that’s a surgery job surely, not a pop it back in thingy.”

Another tweeted: “Good grief. I won’t be unseeing that wrist injury tonight. Poor fella, that’s the least of his worries too by the sound of it. #24hoursinaande.”

A third said: “OMG #24hoursinAandE I just cant look. That was #gruesome.”

#24hoursinaande that wrist injury has just made vom, that’s a surgery job surely, not a pop it back in thingy.

Good grief. I won’t be unseeing that wrist injury tonight. Poor fella, that’s the least of his worries too by the sound of it. #24hoursinaande

“OMG that wrist shot,” said a fifth. “Hid behind a cushion! #24hoursinaande.”

“Feeling a bit sick watching the guy on 24 Hours in A&E that’s snapped his spine,” admitted another, along with a broken heart emoji #24hoursinAandE #channel4.”

OMG that wrist shot. Hid behind a cushion! #24hoursinaande

What did you think of the first episode of the new series? Leave us a comment on our Facebook page @EntertainmentDailyFix and let us know.