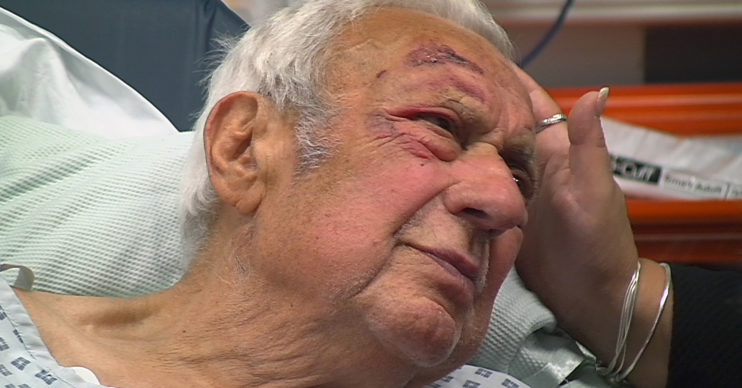 The scene reminded them of the deaths of their grandparents

24 Hours In A&E left viewers hearbroken last night after it aired the death of an 86-year-old man following a stroke.

Filippo was rushed into St George’s Hospital by paramedics with a suspected stroke, but he didn’t survive.

He was conscious when he first arrived, but had a very weak right arm and leg and was clearly disorientated.

His daughter Maria spoke about her dad and his life.

“I couldn’t imagine my life without my father, I love my father very much and the thought of never seeing him again is a pain you have to learn to cope with,” she said.

Filippo was originally from Sicily and then came over here to start a better life and help his family back home.

Maria described how loved Filippo, an ice cream man, was by everyone. Maria also explained how wonderful her father had been to her when she gave birth to a stillborn child.

What was wrong with Filippo?

A scan confirmed he had a significant bleed on the brain, and his daughters Maria and Connie and, daughter-in-law Lisa, were told he had had a stroke and he had to stay in hospital.

They told Filippo he needed to stay in because of the weakness on one side there was a risk he could fall again.

Filippo became distressed saying he wouldn’t be able to sleep, but Maria comforted him.

Unfortunately, Filippo was not a candidate for surgery as he was too old and frail and they worried that he wouldn’t survive the anesthetic.

He was given warfarin to help with the bleeding, but stroke registrar Xuya explained his age was “very much against him”.

Filippo was transferred to an acute stroke unit where he continued to be assessed.

After two weeks in hospital, he died with his Maria by his side.

“I’m glad I was there to tell him how much we all loved him,” she tearfully revealed.

“I’m glad I was there to tell him how much we all loved him. I wanted him to pass knowing we were all here.”
Rest in peace, Filippo. ❤️#24HrsAE pic.twitter.com/WB9W1jSI3O

Viewers at home were in floods of tears over the death, with many saying it reminded them of their own eldery parents and grandparents.

Filippos story reminded me of all of my grandparents. I was sobbing 😭 💕 #24hrsae

filippo reminds me just of my nonno, so i’m a bit of a mess after that. rip filippo❤️ #24hrsae

Rip Fillipo. I found this so sad tonight as my father passed away in 2017. You never get over the loss. 😢#24hrsae

What other cases featured on 24 Hours In A&E last night?

It was just a sprain and she was sent home needing no treatment.

Meanwhile, 82-year-old Susan had fallen while walking her dog and fractured her leg.

After six hours in surgery and several weeks of physiotherapy Susan was able to start walking again.