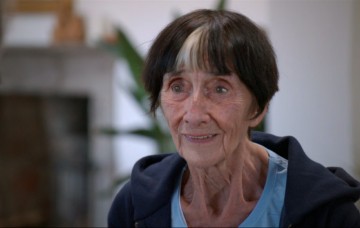 EastEnders legend June Brown proved the biggest celebrity hit with viewers of last night’s 100 Years Younger in 21 Days thank to her gung-ho attitude… and a bit of snail wee.

The 91-year-old showed she was full of life as she launched herself into a variety of different challenges during the first episode of the series, showing up her much younger co-stars.

And June also managed to give her fellow celebs quite an eyeful as she accidentally flashed them during a demonstration of Tibetan yoga.

Lying down on the floor, June lifted her leg and ended up revealing her underwear to shrieks before they (Dot) cottoned on to what she was doing.

Happy Mondays star Shaun Ryder wondered whether he should assist in helping June conceal her modesty.

“I thought I should jump up and whip my T-shirt off and put it over her. And then it clicked and I thought, you know what, she knows exactly what she’s doing,” he said.

Shaun added: “She’s game for anything!”

Soap queen June – whose ‘brain age’ is comparable to that of a 59-year-old – also delighted viewers by undergoing a snail facial, a natural treatment beloved to reduce wrinkles.

“I’ll try it but I might remove it,” she cautioned as the group of celebs received instructions about having five of the slimy creatures placed on their face.

But June proved a real trooper – and even withstood a dirty protest from one of the snails.

Viewers on Twitter were immediately smitten with June, hailing her as a “wonder woman”.

June Brown is a living legend! Puts many to shame. #100YearsYoungerin21Days

Is anyone else secretly wanting to visit this anti-ageing clinic for a detox?! And how is #JuneBrown this fit at 90?! #100YearsYoungerin21Days

One viewer was thoroughly inspired by June’s determination:

Thought to myself, if June Brown at 91 can make changes, then at 66 I feel ashamed that I am so totally unfit!! I was almost on my knees by the end of the first day’s run. Lucky enough to have a beautiful area to run just across the road from my home, so no excuses.

And even actress Vicki Michelle – best known as Yvette in BBC sitcom ‘Allo ‘Allo – was moved to hail June as a “fabulous legend”:

What did you make to 100 Years Younger in 21 Days? Let us know by commenting on our Facebook page @EntertainmentDailyFix.