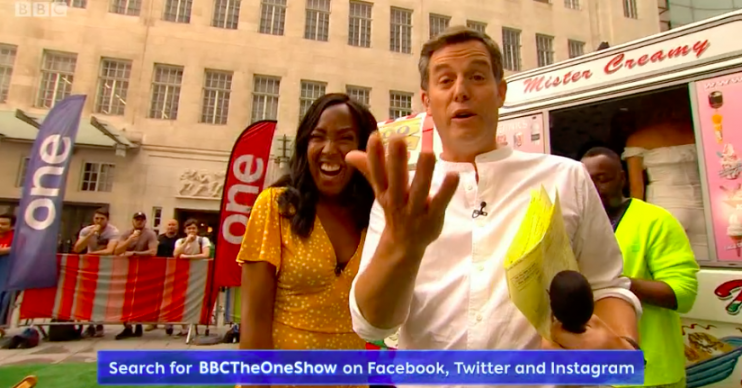 Had his brain melted in the heatwave?

The usually flawless Matt Baker suffered a series of live mishaps during filming of The One Show last night – but managed to laugh them off like the professional he is.

On Thursday evening (July 25), possibly no coincidence that it was the hottest day of the year so far, Matt’s famously cool demeanour seemed to be a little – hmmm – melted.

Matt and co-host Angellica Bell welcomed Pixie Lott and will.i.am to the programme to discuss The Voice Kids finale, set to take place this weekend.

Filmed outside, before moving back into the studio, Matt and Angellica interviewed the Black Eyed Peas frontman will.i.am, where Matt congratulated him on one of the band’s songs being named the second most played on British radio this century.

Only, disengage cringe switch readers, he got the name of the song wrong. Awks!

❓❓❓Did you know? ❓❓❓The @bep 's song 'I Gotta Feeling' is the second most played song on British radio this century! 🙌

Matt, 41, said: “Can we say congratulations because that tune we were just listening to, Tonight’s Gonna Be A Good Night, has just been announced as the most listened to song of the decade…”

He then hastily corrected himself, saying: “I Gotta Feeling, I’ve got the name of it wrong, sorry.”

He then had to quickly add: “Sorry, it’s the most listened to song of the century, not the decade.”

Matt was forced to apologise yet again and admitted: “Sorry, I’m getting all my facts wrong here.”

While the singer-songwriter breezed past the mistake, Matt’s hot brain continued to blunder on as he then promised to come back in the next segment and “get his facts right”.

Later, back in the studio, Matt seemed to have composed himself after eating an ice cream and chatted to the man who comes knocking on your door when you’ve won the lottery jackpot.

It’s not the first time Matt has made a blooper on the live BBC chat show, recently referring to singer Mary J Blige’s mother as being dead, when she is very much alive.

Who is your favourite The One Show presenter? Leave us a comment on our Facebook page @EntertainmentDailyFix and let us know what you think!