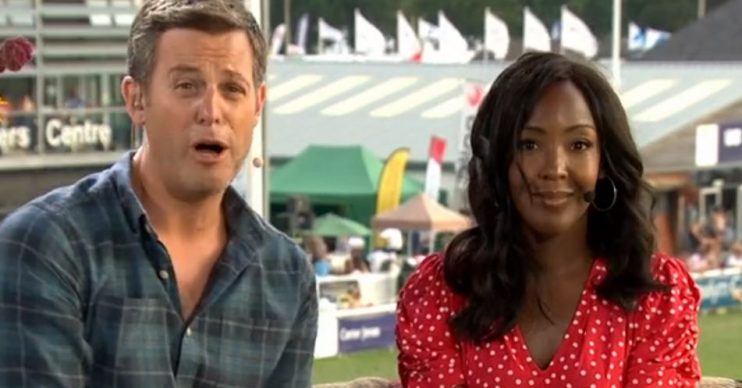 Where did it go?

BBC’s The One Show left viewers stunned when a sheep disappeared at the end of an odd segment on shearing.

Introducing the shearing segment, Matt told viewers: “Can you imagine wearing a woollen coat in this weather? And how much you would want to get rid of it? Well Joe [Crowley] is with the fastest agricultural barber in the world.”

The camera then cut to presenter Joe in a sheep shearing area with champion shearer Richard Jones.

Joe said: “He is a legend barber round here because, just two weeks ago he became the first Welshman to bring home the individual machine shearing world title. Incredible achievement.”

Richard then proceeded to take around a minute to shear a sheep sitting at his feet, explaining how a shearing competition works as he used a set of clippers to take the sheep’s wool off.

But as soon as the animal was freshly sheared, Richard pushed it back between his legs and the animal flew down a trap door and out of sight.

Joe, who was speaking at the time, appeared to miss the moment, which drew giggles from the presenters’ couch.

One wrote: “Wait? We’re did the sheep go? #TheOneShow.”

Another said: “Did he just shove that sheep into a trapdoor? Looked like it #TheOneShow.”

A third tweeted: “Anyone else see the sheep fall through the whole in the back then?! Seemed a bit rough #TheOneShow.”

Did he just shove that sheep into a trapdoor? Looked like it #TheOneShow

Anyone else see the sheep fall through the whole in the back then?! Seemed a bit rough #TheOneShow

But others consider it more cruel not to shear, as domestic sheep do not naturally shed their coats.

A letter published in The Guardian explained that if one year’s wool is not removed, then sheep can overheat in the summer as the next year’s growth adds to their existing coat.

Read more: The One Show viewers freaked out by ‘creepy’ robot guest

It read: “For the majority of modern sheep it is cruel not to shear them.

“Anyone advocating not shearing sheep should try keeping their cosy insulating plant-fibre coat on all through the summer and then add another one on top each year.

“The inability of sheep to shed their fleece has come about as a result of human intervention over thousands of years, making them forever reliant on humans for this part of their welfare. Shearing has to be done.”