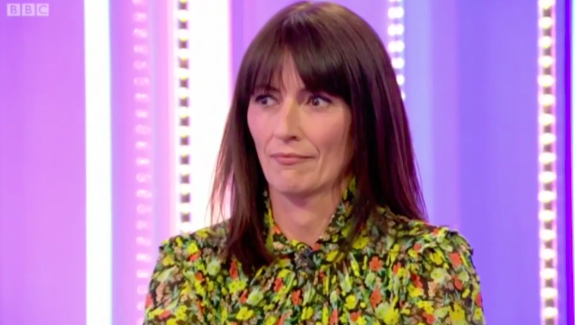 Davina McCall couldn’t hide her embarrassment when The One Show gave her an unexpected surprise – a video from her past she probably would have preferred to stay buried!

On Thursday (June 6), the 51-year-old presenter appeared on the live magazine programme alongside her Long Lost Family co-host Nicky Campbell.

But she was left cringing with embarrassment, when hosts Matt Baker and Emma Willis revealed they had unearthed a long forgotten video from her past.

Matt said: “On Long Lost Family, you’re brilliant at going back over people’s history trying to piece together their life stories. So we were doing similar for you, in preparation for you appearing on the show.”

As Davina immediately pulled a worried face, Matt continued: “And we came across this music video…”

Read more: Davina McCall reveals she took drugs with her mother as a teenager

“Oh no,” Davina sighed, as she tried to hide her face behind Nicky’s back.

As Matt announced they were about to play a video of Davina starring in Kylie Minogue’s video for Word Is Out, Davina squealed: “Oh no, my son is watching at home. This is terrible.”

Over the VT, Davina could be heard saying: “I look like Kylie’s bouncer. I’m twice the size of her!”

Once Davina had recovered from the initial shock, she told Matt and Emma: “It’s the best thing ever, though, right? Being in a Kylie video?”

She explained that the pair were pally at the time, adding: “We were friends. She needed a director for her video as someone had fallen out at the last minute and I said ‘if I get you a director, can I be in it?’ As a laugh.”

Fans watching from home enjoyed the video more than Davina did, with one saying Davina and Kylie looked “hot”.

Long Lost Family will return for its ninth series on June 10 at 9pm in ITV.

The show, which reunites estranged families, will feature a first as the team take on a search for someone in the public eye.

Singer KT Tunstall is hoping to find her birth father and uncovers many surprises along the way.

This series will also include the oldest ever searcher at the age of 83, who is desperate to find her daughter before it’s too late.

Will you be tuning in to watch Long Lost Family? Leave us a comment on our Facebook page @EntertainmentDailyFix and let us know what you think!