They're among Britain's biggest families

Fans of The One Show have blasted the BBC for ‘championing’ a family for having 13 children.

On last night’s (13.08.19) episode, hosts Matt Baker and Michelle Ackerley introduced a segment that saw actor and presenter Kevin Duala helping to whip up a huge meal for one of Britain’s biggest families.

The task was to cook a dinner inspired by the recipes of Great British Bake Off winner Nadiya Hussain before the end of the programme.

Speaking from the family home in Dundee, Kevin said: “You may have noticed from the outside, this looks like an ordinary house. But inside lives a very extraordinary family.”

The camera panned to show a long line of shoes and a huge pile of coats hung on pegs in the hallway, as Kevin explained that parents Emma and Roy still have nine of their 13 children living with them at the family home.

Kevin, reflecting on the immense task of cooking for so many people on a daily basis, and admitted: “I love to cook for the Duala Bears at home but I can’t imagine the stress, the panic and the logistics to cook for a household of that size.”

Dad Roy explained it can be difficult feeding a family so large, particularly as the kids don’t always like to eat the same things.

Mum Emma told Kevin that their average weekly food bill comes to around £200, with Roy adding that they easily go through two loaves of bread and as many as eight pints of milk a day.

On Twitter, viewers were annoyed at the BBC for appearing to celebrate the idea of two people having so many children.

One angry viewer said: “#TheOneShow 13 [bleeping] kids! The world is grossly overpopulated, we don’t have to worry about high child morality rates in the west, global resource and environment problems are accelerating… 13 kids is disgracefully irresponsible and shouldn’t be celebrated!!! Shame on you, BBC.”

Another wrote: “I don’t care if you can afford to feed them, the only thing we should be adding up is the huge environmental cost of having 13 children. Stop championing this nonsense, BBC, and call it what it is: irresponsibility and selfishness. #TheOneShow #SorryNotSorry #Overpopulation.” 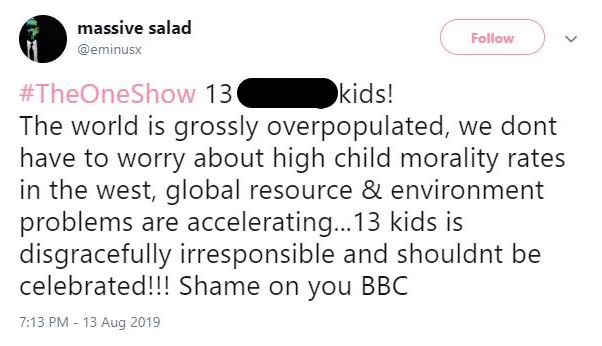 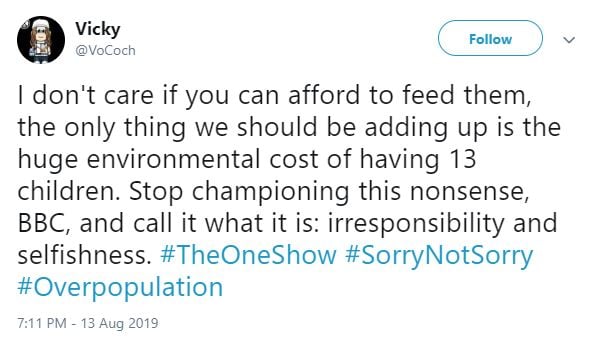 Someone else accused The One Show of hypocrisy, tweeting: “Interesting to see the #TheOneShow applauding the 13-kid family. I’ll look forward to next time when undoubtedly we’ll be back to plastic usage, global warming and our dying environment.”