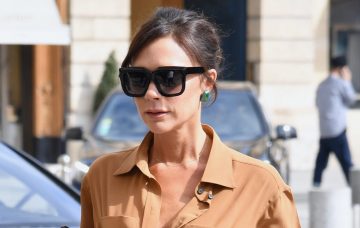 Harper Beckham wears a David mask on her walk to school!

Victoria Beckham’s daughter Harper wore something rather different as she headed to school on Monday – a mask of her famous dad’s face.

The fashion designer shared a sweet snap of her six-year-old daughter on Instagram in her school uniform.

But Harper’s face was completely hidden beneath a large mask of David Beckham’s smiling face.

Retired footballer David was clearly amused as he responded to the picture with laughing and love heart eye emojis.

Other fans also chimed in to laugh at the funny image, with one joking: “Bring your dad to school day!”

Another quipped about a role reversal, pointing out: “Would be funny to see David in that dress lol.”

A third added: “It makes me smile to see “normality” of your family… two big stars but to your kids just mum and dad …. that’s really cool.”

The picture came after Victoria, 44, shared a video of herself and Harper skipping down the road to school

Along with the fun clip, which showed the former Spice Girl star’s light-hearted side, Victoria wrote: “Skipping to school with mummy x kisses from Harper Seven.”

Despite being a multi-millionaire former popstar-turned-fashion designer and businesswoman, Victoria still does the school run with her little ones.

She previously told Belfast Telegraph: “My priority is my children, and every day I do the school run. Every morning I work out and I’m back in the kitchen by 7.15am, ready to get the breakfast going, and then we rush out the door to school.”

Victoria recently praised little Harper’s work ethic, telling Evening Standard: “She gets up early, does her spelling, does her Kumon. She works hard, but she’s a happy little girl.”

She added that all four children work hard and are inspired by watching their parents go to work, but she also never wants to stress them out or push them too hard.

“I believe that children should be children, and have fun. I like to push them because I want them to achieve as much as they can, but I don’t want to push them so much that it makes them overly stressed.”