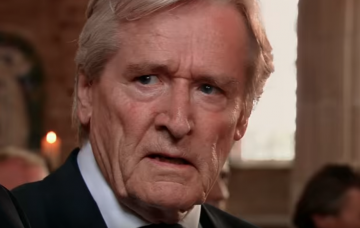 He has explained how Corrie has changed behind the scenes over the years...

Soap icon William Roache feels a little disconnected from some of his Coronation Street co-stars.

The 86-year-old, who has played Ken Barlow across six different decades, believes the feeling of community between actors behind the scenes has withered over the years.

And now the Weatherfield veteran worries he barely knows some of his onscreen colleagues due to changes in the way the programme is made.

While William still treasures his time on the cobbles, he believes the backstage dynamics have changed dramatically since Corrie’s debut in 1960.

Read more: Bill Roache plans to be in Coronation Street on his 100th birthday

“It was [due to last] 11 weeks at first. We didn’t think it would go on longer,” he said during an appearance on Sunday Brunch.

“When we first started there were only 15 cast members and we were all in every episode. It was a community.

“Now there are some [cast members] who I hardly know their names.”

The star added he regretted not getting to spend more time with the wider cast.

He said: “You go in and work with your family and do your scenes and go home. Some of the others, you see them in the green room for a cup of tea and then you don’t see them for weeks.”

William also revealed production changes mean the soap’s cast no longer rehearse for days on end before performing one episode live and then recording the next.

He continued: “Now there is no rehearsal, you just turn up and need to know your lines.

Nonetheless, Ken fans will be relieved to know William has no intentions of ever leaving the show.

Teasing some big upcoming storylines for the Barlow family, he recently said he hoped to become the first actor aged 100 to be regularly appearing in a TV serial.

“I’m very lucky to have the job. I really appreciate the job and I love it very much,” he said on Lorraine last month.

The keen mediation practitioner added: “The ageing process is actually a belief system. The body renews its cells all the time.

“If you slow down, the cell renewal process will slow down and its a self-fulfilling prophecy.”