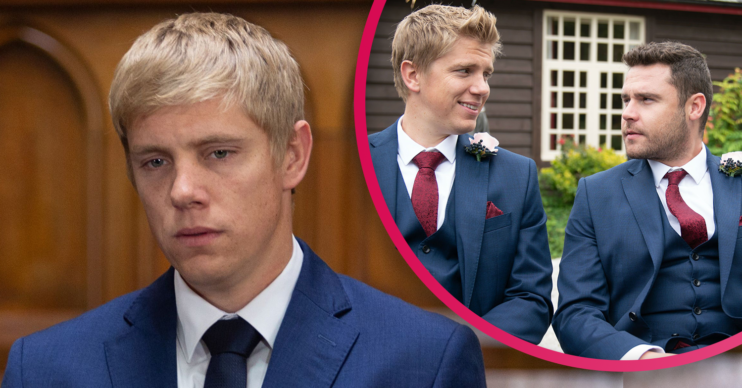 Will Robert return to Emmerdale? Aaron receives heartbreaking letter from his ex

In tonight’s lockdown episode (June 10), Aaron Dingle is left in tears after receiving a letter from his estranged husband.

But will Robert return to Emmerdale?

Will Robert return to Emmerdale?

It’s unlikely Robert (Ryan Hawley) will return to Emmerdale as he is serving a life sentence in prison.

But this is soapsville so never say never.

Ryan Hawley stepped down from playing Robert in 2019 to reportedly pursue other projects.

The actor is yet to confirm his next big acting role – however, lockdown may have halted any projects he was working on.

After filming his final scenes last year, Ryan said: “It’s been an emotional journey – and very sad to leave.

“I’ve learnt so much and feel so much richer for having been here. I just want to say a huge thank you to everyone who has supported me.”

What happened to Robert in Emmerdale?

Robert was sentenced to a minimum of 14 years behind bars for killing rapist Lee Posner.

His sister Victoria fell pregnant after Lee raped her.

When Robert confronted his sister’s attacker, Lee warned he would rape again unless he paid him £10,000.

Filled with rage, Robert attacked him with a shovel.

He later pleased guilty in court and was sent to a prison.

“The scenes where he was ultimately saying goodbye to Aaron was so well written,” added Ryan.

“It kind of felt the right way to wrap up my journey or my time as Robert.”

However, fans were set for more heartache when Robert was moved to a prison in the Isle of Wight.

The transfer made it harder for Aaron (Danny Miller) to visit and resulted in Robert cutting off all contact.

What did Danny Miller say about Ryan Hawley’s exit?

The pair are good friends on and off screen and he was sad to see his pal leave.

After filming their final scenes, Danny took to Twitter and wrote: “What a pleasure the last 5 years has been. An incredible actor & a beautiful man.”

He added: “To share the laughs, the screen & an iconic soap partnership with you has been nothing other than an honour brother!

“Aaron lost his husband. I lose a good a friend.

“Farewell for now, my man.”

Emmerdale is on ITV, Wednesdays and Fridays at 7pm.