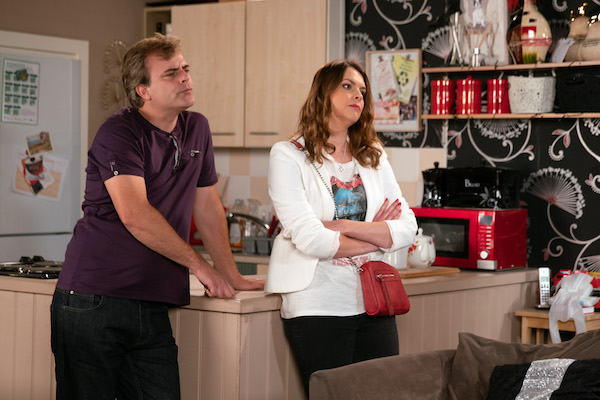 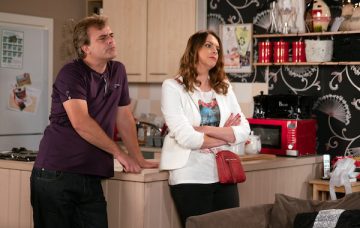 Is Steve up to his old tricks again?

There’s trouble heading for Steve McDonald next week when he is tempted to do the dirty on Tracy Barlow in the run up to their wedding.

The pair, who are set to tie the knot for the second time, have been planing their wedding for months, but with Steve’s eyes starting to wander, could their big day be called off?

Coronation Street bosses have taken to the soap’s official Instagram page to reveal a sneaky snap of Steve sharing some secret dancing lessons with Abi Franklin.

EXCLUSIVE PICS: Steve prepares for his wedding dance with a little help from Abi – see our STORIES for more… #Corrie #Steve #Abi

And as the pair seem to be growing closer as they spend time together, the soap has also hinted on the official ITV.com website that there is drama heading for the cobbles next week in the run up to the wedding…

The website reveals: “Steve attends secret dance lessons with Abi in preparation for his wedding.

“Steve thinks that Tracy has given him a free pass before the wedding and tries to take his opportunity with Abi at their dance lesson. Will he cheat on Tracy?”

“Later, Peter gets a call from Tracy saying that Amy has had an accident and is in hospital. He goes looking for Steve, but what will he find?”

With Steve’s track record, things don’t look that hopeful for him staying faithful.

Not only does he has form for cheating on his current wife or partner, there has long been a question mark hanging over his love for Tracy.

Not only did he end up proposing by accident earlier this year, but he’s also recently shared sneaky kisses with his ex Michelle Connor on her ill-fated wedding day to Robert Preston, and also a surprise kiss with Tracy’s friend Abi.

Could this latest twist in the run up to the Barlow/McDonald wedding be the final nail in the coffin for Steve and Tracy’s relationship, or will Steve manage to make it to his wedding day without his bride-to-be finding out the truth?

Do you think Steve and Tracy should get married? Leave us a comment on our Facebook page @EntertainmentDailyFix and let us know what you think!