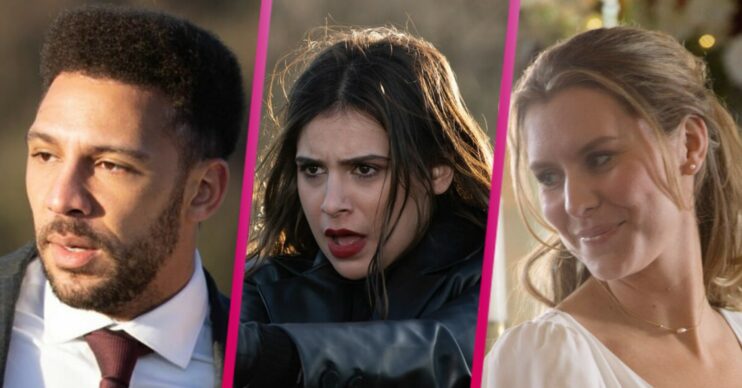 Who will Meena kill next as she returns to Emmerdale?

Not everyone will make it out alive

Meena Jutla is on her way back to Emmerdale with one thing on her mind: murder.

The killer nurse is determined to take terrifying revenge on those who have wronged her and is starting with Billy and Dawn.

But will she stop there?

Who is set to die in Meena‘s final murderous rampage around the village?

Does Meena kill Dawn and Billy in Emmerdale?

The bride and groom are the first on Meena’s kill list.

She’s fuming they are about to get their happy ending when she believed she was meant to be with Billy.

Just after Billy and Dawn say I do in the church, Meena manages to kidnap them and take them to a remote viaduct.

She tells Billy he must choose who will die next as she points a gun at the newlyweds.

Billy, of course, says he’ll take a bullet for his new wife.

Meena pulls the trigger and the gun is fired.

Has she killed Billy? Or Dawn? Or both of them?

Are David and Victoria going to die?

They have also wronged her.

In fact, David was the first man in the village to have scorned the murderess.

Meena was out for revenge on him and his new girlfriend Victoria Sugden during survival week last year.

She tried to drown Victoria, but was disturbed and pretended she was saving her.

Meena then went on to kill Andrea Tate to keep her secret, and also Ben Tucker when he found video footage of the attempted murder taking place.

David and Vic survived the ordeal and soon after escaped to Portugal for a three-month break.

They have returned just in time for Meena’s on-screen comeback, so could she have them in her sights too?

If she sees them loved-up and happy together, surely Meena won’t let this lie?

We’ve missed out on the ultimate showdown between these three – could it happen at last?

The one who got away: Manpreet Sharma.

Meena’s sister was the first person to realise Meena was a murderer and she almost paid for it with her own life.

Meena held Manpreet hostage and spent days counting down to her eventual death.

She also kidnapped Vinny Dingle and planned to kill the two of them together.

But they were rescued by Dr Liam Cavanagh.

Will Meena want to finish the job she started with Manpreet?

Manpreet seems to want to leave the village anyway, but could she be leaving in a body bag?

Is Liam Meena’s next victim?

Liam thwarted her last plot and Meena almost killed him with a rock over the head.

But the police disturbed her and she chose her freedom over another kill.

But when she returns, revenge on him for spoiling her fun could be on her mind.

After discovering she killed his daughter, Leanna, Liam is feeling pretty murderous about Meena himself.

Could he go after her and die in the resulting showdown?

The police are closing in.

Meena must know she’s going to get caught by showing her face back in the village.

Could Meena turn the gun on herself to avoid capture?

Or will someone else kill her to stop her doing any more damage?